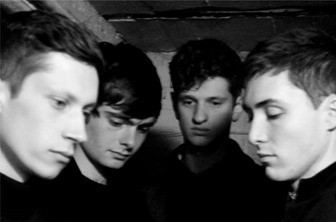 The Darlingtons are a four-piece from  Taunton who come “armed to the teeth with an artillery of life affirming tunes”.They also happen to be playing Mad Hatters on Thursday the 13th of June, so we caught up with them before their trip. 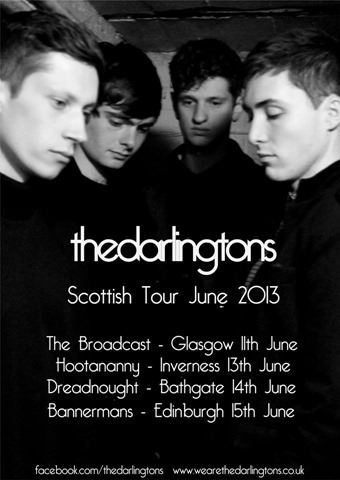 Can you give us a potted history of the band so far?

As a band we have been gigging all around the UK (and Italy) since 2011. In 2012 we released our debut album ‘decades dance’ and are continuing to gig and make people more aware of our presence.

What are the bands influences?

Do you think rock is a fair description of your music?

We think that rock encompasses a wide variety of different sub-genres and a lot of guitar music fits into this category. Our music definitely falls into this genre, though it’s probably more accurate to label it as indie/rock.We do sometimes find it hard to describe our music with genres however, so we just tell people it’s ‘cider fuelled guitar music’.

How did your first gig in Scotland go?

It was a strange one to be honest with you. We played two shows at a festival called KNOCKENGORROCH in may, which is mainly a roots music festival – so we were just about the only indie/rock band playing there.

We knew that the festival was going to be a bit ‘different’ from the moment we arrived, because as we drove in we were greeted by a topless woman wandering down the road! We played a couple of the smaller tents, and even though there
weren’t that many people watching us, we did manage we win a fair few people over.

We noticed that you’ve played Italy ,how important is it for you guys to tour new places?

Italy was a great experience and it allowed us to tap into a new fan base which hadn’t heard of us before. It’s important to play new places as a band so that you can get your music out to a wider audience.If you only play in places you are familiar with, things can become a bit stale.  The gigs aren’t always a success when you play somewhere new, but that’s part of the fun :)

As a band we’d love to play in both America and Japan. We’ve heard from quite a few people that gigs in Japan are awesome and that everyone is really hospitable out there. And reasons for touring in America….well…it’s America!

How would you guys convince the uninitiated to come to a gig of yours?

What’s next for the band?

We are releasing at least two EPs this year. One in July/August time and the other in October. We are hoping to go back out to Italy and continue to gig as much as possible :)