Sgrow are duo  Kristoffer Lislegaard and Vilde Nupen who are self described as “ somewhere in between art and club, the organic and the electronic, the light and the dark”. The Oslo based duo make there way to Inverness as part of the goNORTH 2013 and we were keen to catch up with them when the opportunity arose. 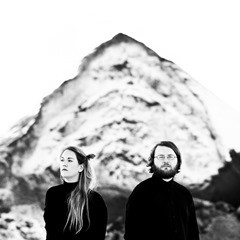 We were in the same class in our music school a few years back, where we both studied music composition and production. Kristoffer played electronics in various bands and as a solo act. Vilde had been doing the singer/songwriter thing for a while, but was getting tired of the traditional girl and piano combo, and therefore asked Kristoffer to contribute on a song she’d written. We were both so pleased with the result that we started to write more songs together, and eventually became Sgrow!

In an article you were described as between Portishead and Björk, do you think that’s a fair description? How do you normally describe yourselves?

First of all, we have to take that as a huge compliment, since these are acts that we of course have been listening to growing up and that we admire. However, it seems that it’s very easy to immediately compare electronica with distinct female vocals to acts such as Björk, although they don’t have much in common except from being electronica with distinct female vocals. That being said, we feel that we have more of the same sound aesthetics in common with Björk, than with Portishead.

When we make our music, we’re not trying to adapt to a specific genre, but rather incorporate all kinds of elements from different kinds of music that we like. We try to blend the electronic with the organic, and we use a lot of manipulated audio that we record ourselves. We like to describe ourselves as rooted in pop, but with a perhaps more intricate, atmospheric and eclectic sound.

What is the electronic scene like in Norway at the moment?

We feel that electronic music is still a bit underground in Norway, at least pure electronic music. Of course we have some really big names within the Nu-Disco/Electropop-scene, such as Lindstrøm, Todd Terje, Prins Thomas, Bjørn Torske and Sandra Kolstad, which all are great export articles. The underground scene however, is pretty big, with the possibilities that have come in recent years in producing your own music with affordable equipment at home, and spreading it via showcasing plattforms like Norwegian radio-based NRK Urørt, Soundcloud etc. There are a lot of great Norwegian electronic acts only waiting to emerge!

Elements taken from electronic genres also tend to find their way into a lot of different kinds of music scenes these days, such as jazz, rock, hip hop, and of course a wide selection of pop music.

How are you looking forward to playing the goNORTH festival?

We are really looking forward to it! None of us have ever been to Scotland, and judging by Google Images Inverness looks like a beautiful place! This will also be the first time we play outside of Norway, so it’s really exciting and a bit scary at the same time.

What’s next on the agenda for the band?

We are currently in the process of writing new material for a full-length album that is set to be released in spring 2014. And of course we are hoping to play a lot of concerts, other than the exciting ones we already have planned. We also want to evolve our live show further. It would be really exciting to make our visuals more extensive and intricate, involving several surfaces and being even more interactive.

You can get more information about the band at  www.sgrow.org and www.facebook.com/sgrowmusic.

Keep track of our goNORTH coverage.