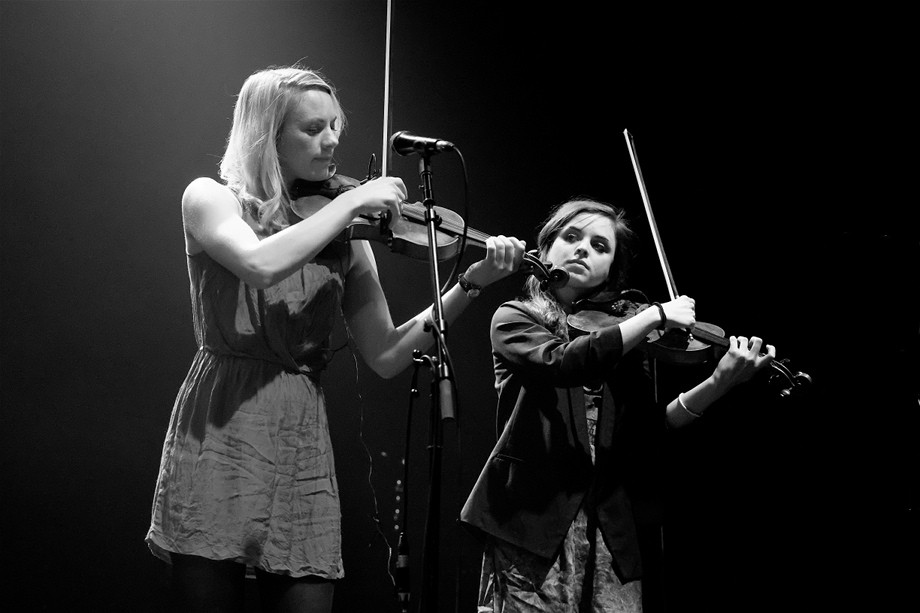 A review of Rachel Sermanni + support at The Ironworks on Wednesday 22nd May, 2013. 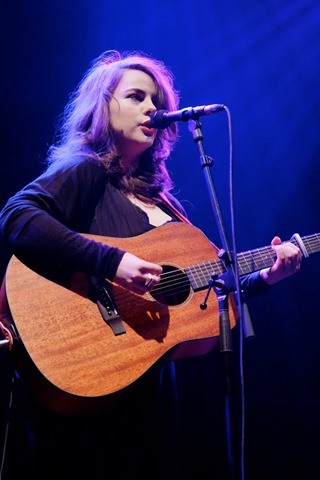 The smoke machine gives an extra puff and the backing track fades. There is no introduction, but someone has taken to the stage with a guitar to stand at the microphone beneath the spotlight. Trying to stare past that spotlight must be difficult, and from the stage the cabaret set up with tiny candles on each table must look like the runway lights as seen by a drunken pilot trying to land at night in the rain – something I’d prefer not to think about. It must take courage to walk from the side of the stage to that spot, so we can forgive Megan Blyth if she seems a wee bit nervous. Well at least in her brief bouts of banter with the landing lights, because it was quite a different matter when she started to sing.

Megan is the proud owner of a powerful resonant bluesy voice with quite a range. And she’s not afraid to use it. Indeed Megan introduces ‘Freedom of Silence’ by telling us ‘it’s about being quiet, something I’m not very good at’. Elsewhere we have lyrically mature songs such as ‘Anna’ (which features on her new EP) or ‘The Devils Own’, a creative imagining of another life. It’s been said before so I’ll say it again, Megan Blyth is one to watch, she was well received by this audience and if you get the chance to catch her live set then take it. 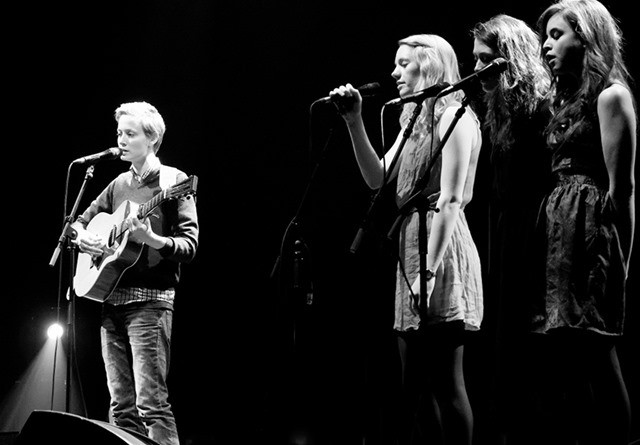 Mo Kenney has been added to my list of All Time Favourite Canadians. Hailing from Waverly Nova Scotia you have a sense that she could be at home anywhere, and she certainly seemed right at home at The Ironworks. If there were any reservations about taking to the stage she didn’t show it and I would suggest that anybody who whistles during their second song is feeling pretty damned comfortable. That shouldn’t have come as a surprise, Mo has been busy and it has been a busy that has included gigs of all shapes and sizes including supporting Ron Sexsmith: but she truly was totally at ease.

The set opens with ‘Eden’ a fingerpicking gem, she whistles her heart out during that second song and by her third number, a song about a lake near her home in Waverly, I have decided I’ll be buying her CD this very evening. Just as well, “If you don’t want to buy a CD I give out free hugs” she says: I was too shy to ask for a hug. It’s not that Mo Kenney defies the genre challenge, it’s just that I’m thinking what’s the point? Country blues, poppy folk – who cares, it’s all good. Sometimes I hear echoes of KD Lang (also on my list of All Time Favourite Canadians), particularly the way she bends those beautifully warm mellow notes. This is used to greatest effect on ‘I can’t talk’ during which she abandons words for a free-floating vocal melody.

As with the aforementioned KD Lang, Mo has an androgynous look, but whereas KD defaults to Elvis, Mo has shades of Bowie about her (David, not Jim), and I had made my mind up about that before she finished with an inspired rendition of ‘Five Years’ from his Ziggy days.

There were no ‘low lights’ in this set but one of the higher lights was ‘Deja-vu’ a song co-written with her mentor Joel Plaskett, a guy who reputedly knows talent when he sees it. Joined on stage for the penultimate song by Rachel Sermanni and her band, this was a mighty fine set indeed. Mo Kenney is warm, charming and very likeable. The audience reciprocates with a suitably warm and enthusiastic response and more than just me will be waiting patiently for her return to these parts. 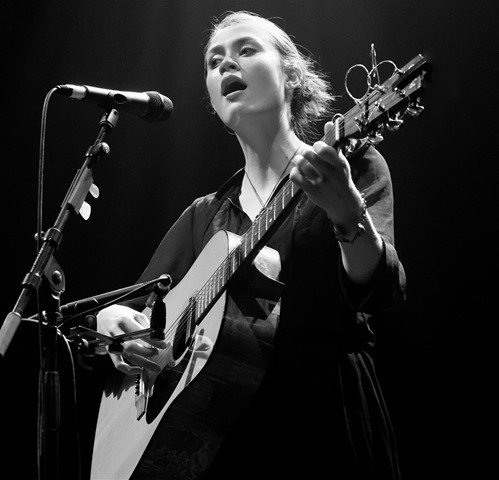 In my head, Rachel Sermanni exists on a continuum somewhere between Tabitha from Bewitched and Galadriel. She is charming, beguiling, otherworldly and yes, bewitching. She has now such an intriguing presence on stage that you can’t stop looking, even when there doesn’t appear to be that much happening. The stage becomes a liminal space where Rachel Sermanni stretches her breath and her voice almost to a breaking point at times and yet somehow we can still hear it. She can make herself so small, so fragile, that we hold our own breath for fear she might float off. I think she is more in control of space and stillness and silence than anyone else I have ever watched. And her collaborators on stage, compliment her perfectly, especially Siobhan Anderson and Laura Wilkie who provide backing vocals and fiddles. Tonight is the first time I have met the keyboard player Jen Austin who completes the sound. And what a sound, there isn’t anything that you sense should be added and there is certainly nothing missing: it is beautifully balanced.

Rachel has been off touring far and wide and has returned to the Highlands before heading off on the road again. ‘This is home, this is not like work’ she says. Now a ‘gig’ can mean a few things, an engagement for an entertainer, a job of work or a musical performance. ‘This is not like work’ rings true here, because what we get tonight, as I’ve already alluded to above, is a performance. At times she seems to drift into spoken word and even her conversation with the audience has a musicality about it while the fiddles and harmonies tease you at times with a discordant melody that intrigues but is never unpleasant. In fact it all works so damned well. 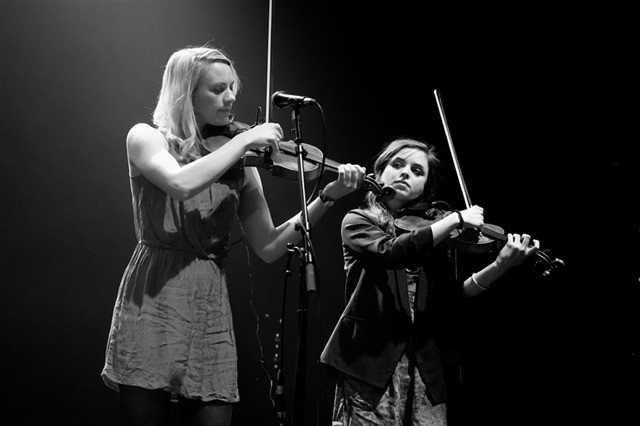 Continuity with the Megan and Mo is assured by a solo start that includes ‘Black Current’ before the rest of the band join her on stage. We are treated to ‘Bones’ and ‘Sleep’ among others before Rachel goes solo again. Now, Eddi Reader’s version of ‘Ae Fond Kiss’ happens to be one of my all time favourites so I’m a wee bit worried when Rachel takes this on – I needn’t have been so concerned, she has a command of this classic that compares favourably with any account you are likely to come across, including Eddi’s. Siobhan, Laura and Jen return and I really don’t want this evening to end, but if it has to then ‘Little Prayer’ and ‘The Fog’ will do nicely. Suffice it to say, the audience wholeheartedly approve, they have listened attentively, they have been treated to a performance and they have been entertained.

In many respects, the closest thing (‘thing’ is such an inadequate word here) that I have come across to tonight is, appropriately enough, from the performance artist Laurie Anderson and in particular ‘The Ugly One with the Jewels’. Tonight had that same sonic quality, that same surreal edge to the content and a similar sense of humour. Lyrically it is funny, perceptive, thought-provoking; she has a poet’s eye for the poignant detail and the bigger picture. Rachel Sermanni is a very generous storyteller and indeed you get a sense that music alone will not anchor her or her muse. A new CD please Rachel, to go with that book of illustrated short stories.

Special thanks to Niamh MacKenzie for taking notes while I photographed during the first three songs of each set.

See what Megan Blyth said about the gig and her new material in our review and interview of Megan Blyth at HMV.

Further photos of the gig;