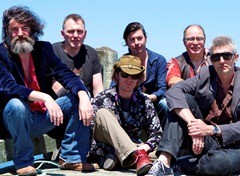 Shooglenifty are to play The Picture House, Dingwall on the 3rd of May.

The 6 piece, launch their UK wide tour with a gig at the Picture House, Dingwall which will see them play Glastonbury at the end of June. Attempts to define Shoogenifty’s sound has earned them the rather intriguing the labels of ‘hypnofolkadelia’ and ‘acid croft’ although it is perhaps the Chicago Tribune’s description of being “…a bit like a jam between the Tannahill Weavers, Phish and The Chemical Brothers” that helps you get the picture?

The band have travelled the world and proudly boast of being the first band ever to incite a stage invasion at Sydney Opera House. So it might not be any surprise that Folk Radio UK concluded their review of the band’s 2012 Celtic Connections gig with “‘part gig, part show, part ceilidh, but most importantly, simply a good night out’? A good night out is rarely as good as this.” So almost perfect for a night out in Dingwall.

For more details of the gig please see The Picture House Dingwall website.

Keep up to date with the local scene by signing up to the Inverness Gigs mailing list.