‘True Talent’ to be hosted at Dingwall Town Hall on Saturday the 25th of May. 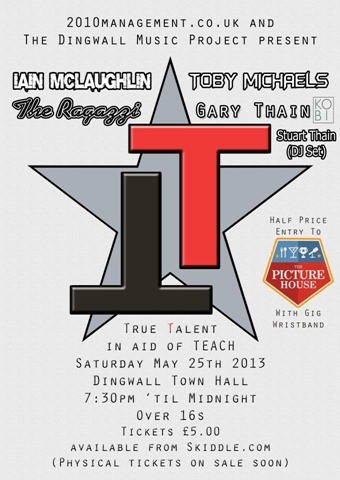 Iain McLaughlin, whose second surname is most frequently “& the Outsiders”, can’t help but impress in creating a different dimension to songs more often heard with electric accompaniment. Expect him to wow the crowds with intensity and emotion and perhaps an acoustic versions of music to be heard in the Outsiders album planned  for the new year. Toby Michaels has been playing more often than not with Rolling Damned more recently, is no stranger to the acoustic scene. He brings drama to rock ‘n’ roll that creates immediate similarities to Meatloaf. In this past his covers have included ‘Bat out of Hell’ and  System of a Down’s ‘Chop Suey’, however whilst neither is a certainty there will no doubt ‘A little bit of what you fancy’,

Gary Thain is better known as the front man for KOBI,whose return to the scene almost two years ago have seen them play high profile gigs at King Tuts, Belladrum and Rockness, to name but a few. KOBI’s latest single ‘All the Way’ is released on the 22nd of April, True Talent will give the audience an opportunity to see him on his own. Final act, and very definitely not a solo act, are The Ragazzi  the three piece whose sound and styling mixes The Vaccines with The Proclaimers . The night will start with a DJ set from Stuart Thain.

True Talent aims to raise money for TEACH, Colin Cannon explained to us last year that the organisation “is aimed at elevating poverty in Africa through education, which in my opinion is far more beneficial than hand outs as the root of the problem is addressed rather that masked. What more can be said”. Indeed.

True Talent tickets priced £5 are available on line. Full details of the gig can be found on the True Talent Face Book page.