Music Plus Acoustic Showcase to be held at Mad Hatters, Inverness on Saturday 20th April 2013. 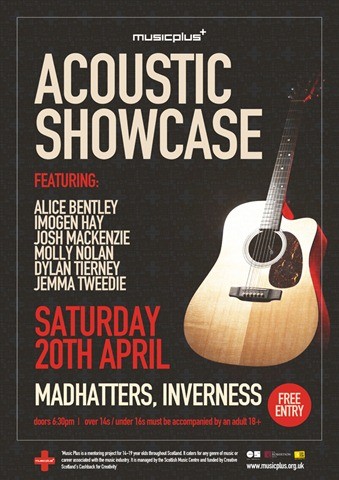 The showcase will see the bringing together six acts from the area:

Dylan Tierney – the precocious talent whose relentless gigging has seen him play not just the locality but gigs in Perth, Dunfermiline and Liverpool. He has recently been announced as playing on the same bill as The Boy Who Trapped the Sun at The ironworks on the 10th of May.

Alice Bentley – formerly of Young Trees, under the guise of which she played at Belladrum 2012 and supported Rhythmnreel. Her recent performance at the Ironworks Easter Showcase wan over new fans, whether it be with her version of ‘Pumped up Kicks’ or her original composition of ‘Scottish Rain’.

Imogen Hey – a multi instrumentalist from Kirkhill, has been songwriting since she was twelve and through the Music Plus project she has received input from Abagail Grey’s Claire Campbell.

Joshua Mackenzie – a well known and very well respected musician, currently playing in the indie-rock Lionel although will also be heard soon on one of the tracks of Dougie Burns forthcoming album. The showcase will be Joshuas debut solo performance.

Molly Nolan – Molly identifies Norah Jones, Ray LaMontagne and Tom Odel among her influences although she also plays a mixture of classical and traditional Scottish music. She is currently working on her debut EP.

Jemma Tweedie – The self taught songstress has been prolific in her gigging and it’s only going to get busier for Jemma who has announced a multiple date tour of coffee shops in conjunction with Caffe Nero.

The six acts were invited to record their own music and to add to each other’s songs at a two day recording session at the Watercolour Studios in Argyle under the tutelage of Nick Turner, Jim Hunter and Robbie Dunsmore.

The gig is being organised by other local young people as part of their involvement with Music Plus. This is a great opportunity to hear some of the Highlands emerging artists and get a sample of what they have to offer, and definitely not an evening to be missed.