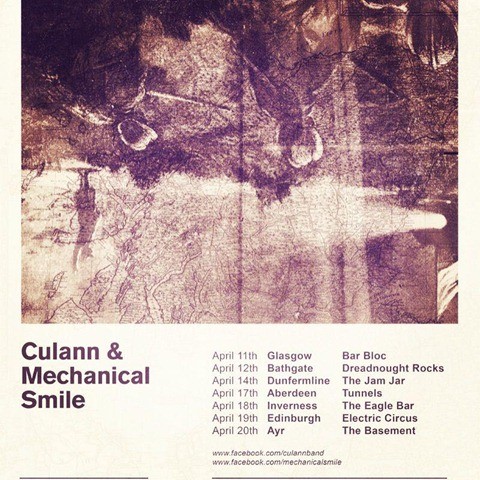 Kilmarnock’s Mechanical Smile and Irvine’s Culann will be playing The Eagle, Inverness on the 18th of April.

Culann’s celtic-tinged indie rock was described as “underneath its outer layer somewhat more complex than most and it demanded to be listened to” . Indeed in an interview with Rave Child drummer Sean Kelly said “the best selling point is that we’re different, so you hear something you wouldn’t usually hear”, creating what they define as “Melodic, accessible, complex and challenging”. Their style has not gone unnoticed and Culann are currently riding the wave of success following their success in winning “Best Rock” at the SAMA’s 2013.

Fronted by Dawn Marshall, Mechanical Smile they were boldly heralded as “the best female-fronted rock band since The Cranberries” by Rick Fulton of the Daily Record. Echoing the plaudits a blogger noted that they were “a Rock band with the added edge of terrific song writing, along with a singer who has the voice of raw honey”. Darlings of the rock scene which have seen them play Download and Slam Dunk last year whilst being featured in Rock Sound, FRONT and Kerrang!.

It’s more than a cracking wee line up added to by local bands Searching for Donkeys and Naked Red, fresh from an impressive set at the Easter Showcase.

Catch up with Culann and Mechanical Smile.