A review of The LaFontaines club font night at the Classic Grand, Glasgow on the 6th of April 2013.

In many way this was both a gig and a well packaged show with ushers handing out programs of the evening’s events, greeting your entry into the elegantly presented hall. The Classic Grand in the past had been used to show adult films and in many ways has an elegance with that almost grimy edge that could echo the rap-pop Motherwell headliners.

Unsurprisingly the first act Waiting for Go were a be-suited rabble rousing indie set up whose electronic tinged set was punctuated by the now somewhat tired, but enthusiastically received, chants of “Let’s go fucking mental!”. Rabble rousing phase one complete.

Next on the bill DJ Big Al who served up short bites of hip-hop and rap along with Nirvana and even managing a request for the Jackson Five. Interacting and responding with the audience, with all the capacity of the likes of Zane Lowe to raise anticipation of the headline act. 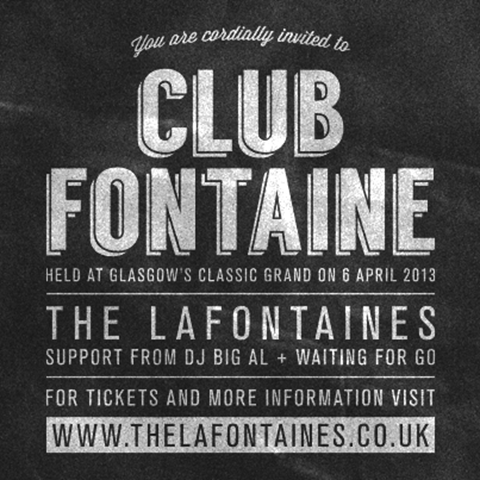 Suitably roused, the audience responded well to The LaFontaines taking to the stage with the big band styled intro to ‘My Yo-yo’. This set the stage for an all out attack albeit  coated with pop sensibilities. Indeed bloodied noses and brave crowd surfing played testament to the appreciative crowd.

With a vibrant Scottish rap scene, The Lafontaines create accessible anthems pulled off with stylish aplomb whether that’s with ‘Superstar’, ‘Light up the Background or ,VV Brown cover, ‘Shark in the Water’. Lead Kerr OKan attacks the rhymes with a confidence well earned, although it is when John Gerard takes on lead that you can see the differing dynamics of the band. They were joined by Twin Atlantic’s Barry McKenna on cello for ‘All She Knows’ which Okan used as way of a thank you for Twin Atlantic’s support of the band in their early days.

The band remain unsigned, “who needs a record contract when you have cake” OKan  adds, brandishing a branded cake mid set. The plugs for merch remain too, highlighting to the reviewer the hand to mouth nature of the music scene for perceived popular bands

A brief intermission in the guise of a singalong to Barry Manilow, which appeared perfectly apt in a “gotta be there” kinda way. In many ways a good example of the band creating a sense of event and occasion that sometimes can get lost by bands.

The chorus of encore ‘Paperchase’ framed the evening well, “We are the masters of our fate”, it certainly seems that way. The set did much to reassert their presence on the Scottish scene, if indeed that was necessary..

The band treated the partisan sell out crowd to the typically trademark high octane but at times poignant set. They left us with one question, are The Fonts on the top of their game or ready for the next step?

Thanks for joining us at Club Fontaine Glasgow. That was incredible. twitter.com/TheLaFontaines…