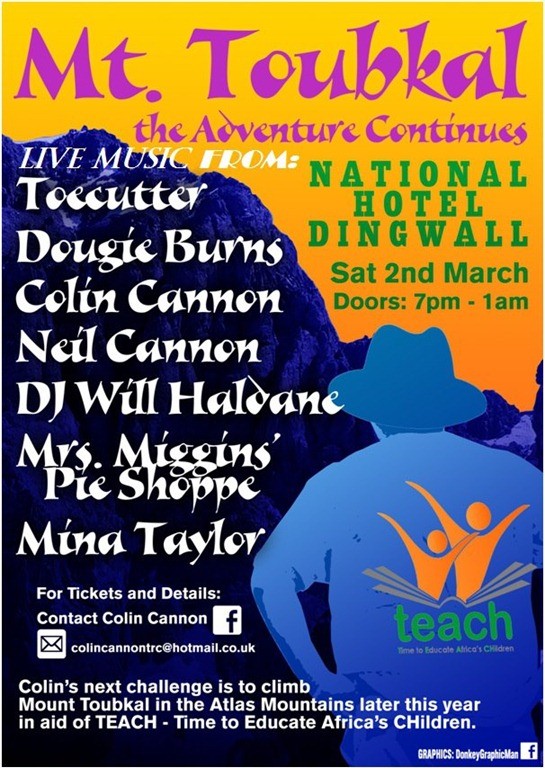 An interview with Colin Cannon prior to his fundraising  charity gig on the 2nd of March.

Last year a good friend of mine became sick of dreaming and decided to make a life changing decision. He was to climb Mt Kilimanjaro in aid of the charity TEACH and organise an epic music event , the likes Dingwall had never seen , to raise money for the climb. The event went off with a blast and Colin is looking to top his last years efforts with yet another epic night of music this March.

This year sees another gig, in another venue and another mountain (Mt Toubkal, Africa) although the charity remains the same. On speaking to Colin, here’s what he had to say about this year’s event. 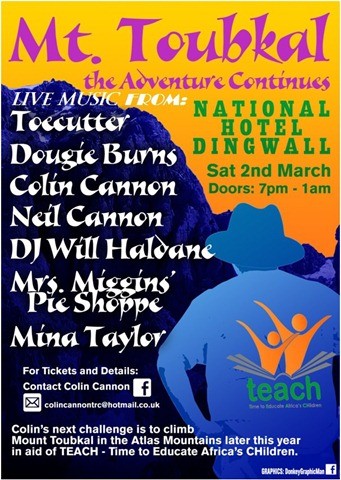 For those unfortunate enough to have missed this gig last year. What should people expect from the evening?

A wide variety of music, a good old fashioned bevy session and banter by the truck load. Whatever you’re into we’ve got it all.

Would it be true to say that last year’s gig was organised on a shoestring and heavily carried forward by many peoples keen interest to do something for charity?

Yes, there was a huge interest in promoting a worthwhile charity and at the same time everyone found their place where a jam and a drink was at the ready.

Is it much the same situation this year or are you more organised?

Nope, much and such the same with regards to stress levels anyway. Finalisation is still underway but that’s what I thrive on.

You have arranged for a larger venue (National Hotel) this year as the British Legion was at or over full capacity last year. Do you think you will have any problems filling the floor this year or do you expect another full turnout?

Last year we created a huge buzz and we nearly had to turn people away at the door. This year we’re expecting the same so get your tickets as soon as you can to avoid disappointment.

The 2012 event saw an extremely wide range of musical talent ranging from acoustic solo artist all the way up to heavy metal, which while a little risky, left something for everyone to enjoy. Are you sticking with the same formula this year or are you going to play it safe?

I’m sticking to the same formula for sure. I think the general vibe build up from acoustic through to rock, though to heavy metal transpired into everybody at the event and by the end everyone was just buzzing having a good time.

Can you tell us a little bit about the charity that you are raising money for and how the money raised will benefit those who need it?

The charity is called TEACH and is aimed a elevating poverty in Africa through education, which in my opinion is far more beneficial than hand outs as the root of the problem is addressed rather that masked. What more can be said

What can we expect from you in the future as I sure you’re not going to stop here right?

More gigs, more mountains and more money for charity. Each year the bar will be raised. There are also talks about a mini festival type gig that may take place in the future. That’s the dream anyway but we would really need everybody to pitch in and make it happen.

The event will be held on Saturday the 2nd of March 2013 at The National Hotel, Dingwall. For tickets email Colincannontrc@hotmail.co.uk.