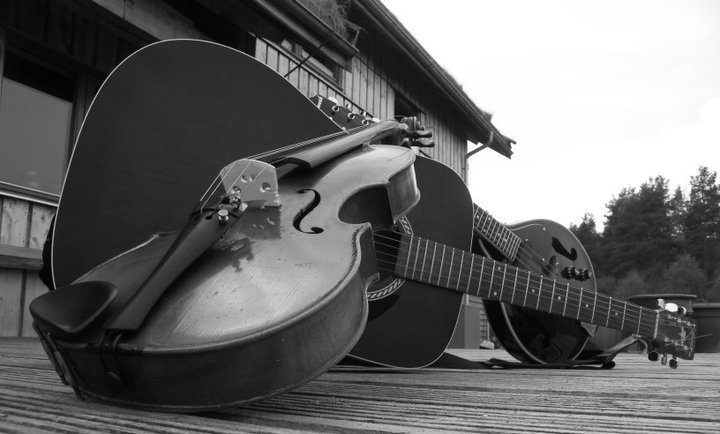 A review of Chris Roberts and Dylan Tierney playing at Glachbeg Croft on the 19th of February.

Going to Glachbeg Croft Folk Club to see some live music on Tuesday seemed the right place to be on a cold foggy night.  Driving up the small country road, I could see the different coloured lights coming from the small building. This was my first time going to Glachbeg and I love how quirky and different it is from other venues and it has such a friendly feel about it.  Glachbeg, run by Helen and Bob Bull, host a monthly open mic session followed by artists playing.

Before the main two acts performed, there was an open mic session where a couple of people played. I wasn’t sure what to expect because I’ve never been to an open mic session before but I really enjoyed it. Neal Kinghorn started off the evening playing a few songs along with his guitar. He played a few cover songs that I had never heard before but they sounded really good. Next to play was Howard Swindells who was introduced by Helen as a fiddle player but with a less traditional sound! I don’t think I’ve ever heard rag-time played on a fiddle before but it was well received by the audience!

After the open mic session it was time for Dylan Tierney to play. Dylan is a 15 year old singer/ songwriter from Inverness. He only began playing last summer but has already played many gigs around the Highlands and will also be playing in Liverpool this year.  He was accompanied by Aaron Goodall playing the cajon. He played his own acoustic/ indie based songs, including ‘Do You Ever Think?’ which also has a video that was produced by Nut Productions and has had over 9,000 views on YouTube. He played a mixture of laid back and more up-beat songs that all worked really well with the cajon drum. I really liked his music, lyrics and sound, and his songs came over well with the crowd.

Next to play was Chris Roberts who is a singer/songwriter from Inverness.  His music is folk based but he also manages to mix folk music with politics, humour and Shakespeare! His set went down very well with the audience although I didn’t get all of the political jokes! Chris was joined by Howard Swindells towards the end of his set for one song. They had never played or rehearsed the song together before but it worked really well.

I am looking forward to returning to Glachbeg next month to hear Neal Kinghorn and Jemma Tweedie.  If you haven’t been before it is definitely worth a visit especially if you are a local musician and want a chance to play an open mic session.

Keep up to date with the Glachbeg Folk Club at their Facebook Page.

You can also read our last interview with Dylan Tierney.