A review of Late Landing playing The Eagle, Inverness on Saturday the 16th of February. 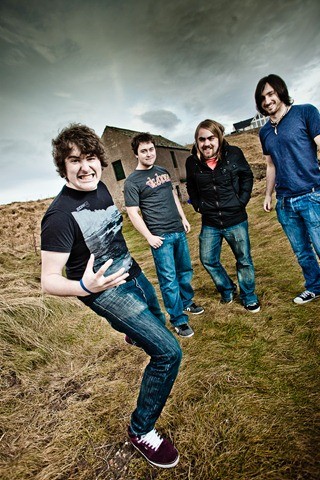 On Saturday, I managed to catch Montrose’s finest ‘Late Landing’ as they ventured to Inverness for the first time. A band who describe themselves  as  hard rock outfit  who play LOUD, HARD and get all up in your grill with exciting original material certainly didn’t disappoint

They started the set with the working title track ‘Choco Dadio’ and it instantly grabbed my attention.  It was just a shame that there was another high profile gig in the town that night which left the Eagle rather sparse.

I had heard the bands recordings previously, but was not prepared for the infectious grooves and heavy riff sessions;  which they delivered in abundance.  These guys are definitely a live band and I would for sure go and see them again.

Next on their set was ‘Give it all away’.  The riff onslaught continued as it started and with some heavy instrumental sections this was one of my favourite tracks of the evening, even though bassist had to stop playing and jumped off stage to grab a cloth to mop up his spilt pint.

One thing that stands out about this band, in my personal and rather bias opinion, is the rhythm section.  Paul and Nicki on bass and drums respectively were absolutely on the money and as tight as a ducks a**e.

About halfway through their set the band played the song Wander.  The song starts with a clean guitar intro, followed by some chord progressions played on the octaves with the chunky bass keeping the whole thing moving.  By this point in the night I felt the guys were slightly losing momentum; but I know from experience that it can be extremely disheartening and draining to play in front of very few people – and to be fair they had kept the energy moving up until this point.

Later in the set the band came alive again with what was my favourite song of the night.  ‘Live a Lie’ starts with an intro that had come to be expected by this point of the night, but then breaks into a riff that would not be misplaced in a Deftones track.   This song was hard not move along to and I could see the band felt the same.

To sum the set up I would have to say that when asked to review these guys I was expecting just another rock band at the Eagle, but was pleasantly surprised at the musicianship and the sheer energy these guys delivered.  They appealed to my heavier taste in music at times but also had the melody and diversity to appeal to a slightly tamer Inverness crowd.   All in all, highly recommended band and gig – and also one you wouldn’t be afraid to take your missus to.