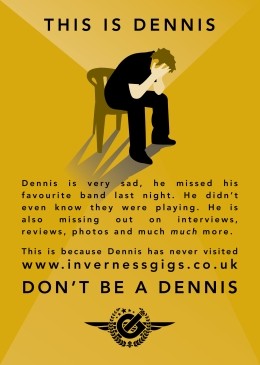 Described by a contributor to their website as the “Best band in Aberdeen by a country mile, and there are a few very good bands up here”, however it is their own description that alludes best to their sound “if you were to take the intelligence of The Divine Comedy, the vision of John Barry, the creativity of Radiohead (circa “The Bends”) and the soaring vocal talents of Scott Walker you wouldn’t be far away. And that can’t be bad, can it?”.

Their debut album  “Animals with Amazing Disguises” was released in April last year and earned a mention in Vic Galloway’s favorite albums of the year (coming in at 42 only because of the alphabetical nature of the latter parts of the list).

The band will be supported by Fort William’ The Big Stumble. Doors 9 30pm.