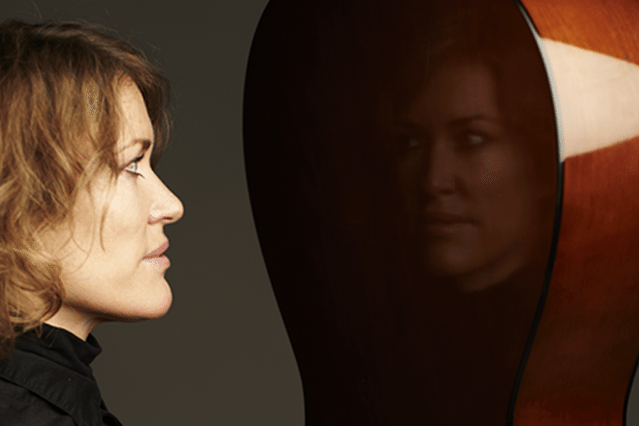 A review of Cerys Matthews, at the Ironworks, Inverness on the 17th of December, 2012.

An exuberant Matthews took to the candlelit stage spirited and relaxed.

The evening promised to be intimate and informal as she welcomed her Highland audience with a traditional Scottish song, praising the Scots for their heritage in song writing and for our appetite for bloody war, gore and class divide. Nobody quite does it like the Scots!

She was quick to follow with her Welsh offering, jesting about the origin of this unconventional love song and proving that nothing had really changed over the generations keeping this song as fresh today as was when it was written in the 1800’s sung in English and Welsh an animated Cerys gave it gusto.

With every song came an understanding, Cerys illuminated the audience’s imagination as she imparted each songs history by way of introduction.
Great Scots songs that crossed the Atlantic were shared as she cradled her homemade banjo. Out of great tragedy comes great songs, she assures the audience as the theme of toil and hardship continued in good humour.

Woody Guthrie was celebrated for the honest simple song writing that connected across the cultural divides. Audience participation was required for a risky rendition of ‘Take a whiff on me’ Cerys reassured the audience although pre dating rock and roll this song due to its illicit content was the original rock and roll song, the Inverness crowd obliged.

Keen to connect with the area and disappointed that there was no ghost to haunt the venue she read from Robert Burns a comedic parody from the male and female perspectives indulging the audience by doing the voices, an amusing anecdote.

Immersed in her love for words every song selected for the evening was treasured and played with love and respect.

To end the evening a theatrical rendition of ‘A Childs Christmas’ by Dylan Thomas was brought to life by Cerys’ enthusiastic phrasing and punctuated by comic sound effects.

Off course the evening was not complete without original arrangements of Christmas Carols featuring the kazoo and jingle bells in a traditional sing song embracing the Christmas spirit!

The evening was a classic songbook, bound by history and presented with festive cheer. An inspirational gift for music lovers to pass to others in the spirit of the season.