With new album , “Anna” due to be released earlier in the month, The Courteeners are to play Ironworks, Inverness on Thursday the 28th February, 2013. 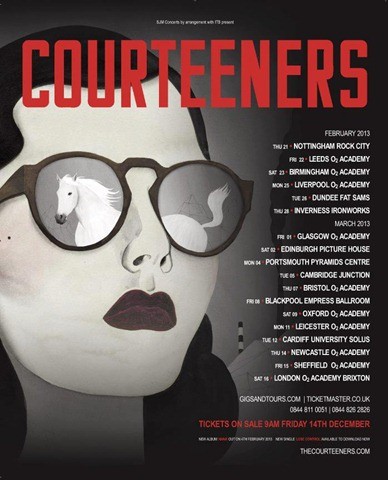 2012 has seen the Manchester indie rock band , playing a clutch of UK and European festivals, ending the year with a home coming gig at the MEN in December.

John Robb of Louder than War noted of the lead singer: “He’s a top songwriter this Fray, a charismatic lanky kid armed with a guitar and a guttersnipe mouth who sings songs of scruffy beat up real Manchester, not the hip corporate tourist brochure of Manchester but the real dog eared Manchester that was the inspiration to all the great music that ever came out of the city”. A brutal honesty that has wan fans such as diverse as Morrissey and Noel Gallagher .

Tickets for the gig go on sale via www.Ironworksvenue.com at 10am on Friday the 14th of December.