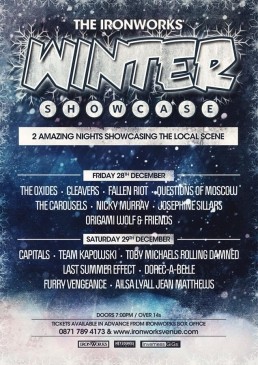 Originally billed as Origami Wolf and Friends, it will actually  be new band Woodentooth that will be joining the line-up at the Ironworks Winter Showcase on the 28th of December.

Woodentooth join with Furry Vengeance (who play on the 29th of December) for debuting a new band to the Showcase. As with the furry boys, Woodentooth bring together a collection of established local musicians. The band will bring together Rory Baldwin, aka Origami Wolf, with former Ball Deep and Lymerick Smith band mate Pete Nairne (lead guitar).  Derek Urquhart (drums) and Simon Wort (bass) finish off the line up. Rory explains “we were originally announced as Origami Wolf and Friends due to the lack of a name at the time, it will in fact be a different beast altogether.” The band promise (mostly) new material taking influence from 90’s grunge and dynamic rock.

Woodentooth play the Ironworks on Friday 28th December. Tickets are available via www.IronworksVenue.com or from the band via the Woodentooth Facebook page.