Ex-DragonForce lead singer ZP Theart returns to the Ironworks, Inverness, with his new band I AM I on Friday 29th of March. 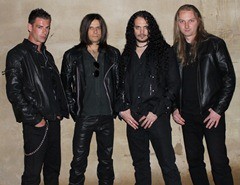 Despite early hiccups with the new line up (they lost two members in 72 hours), they seem to have settled and have already played the main stage at Bloodstock 2012 as well as a support slot with Ugly Kid Joe. A string of dates supporting Skid Row early next year should add to their profile by the time they reach the Ironworks in March.

In a departure from the Power Metal noodlings of DragonForce, I AM I describe themselves as ‘heavy rock’ and  in debut album ‘Event Horizon’ there are definite leanings towards 80s AOR bands like Def Leppard.  Whilst ZP may have toned it down a little with the new band, I AM I’s website promises that he is ‘an absolute must see live, he epitomizes everything a real rock front man should be, and performs honestly and effortlessly.’ So it might well be time to dust off the leather trousers, dig out the denim jacket and grow the mullet back in time for their gig in March.

Event Horizon’ was released earlier this year and will be available digitally from the usual outlets on the 10th of December along with a cover of ‘You’re The Voice’ originally by John Farnham.

Tickets are on sale on 30th of November at www.IronworksVenue.com .