Takeover #4 is on Friday 30th November at Mad Hatters, Inverness from 9:30pm 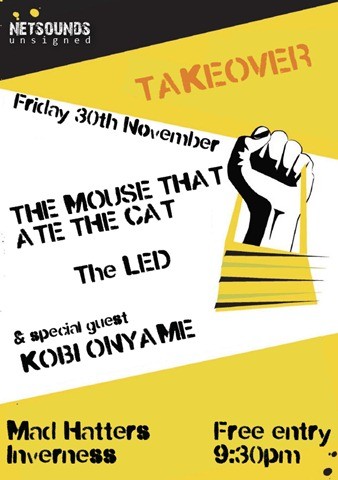 Just when I thought life was simple. The curfew has come to a welcome end and all is good with the world. So it seems until a local nightclub tells everyone, and their brother, on Facebook that it has gone back to the 80s and even changed its age policy on a Saturday night and everything seems all so complicated again. But wait, it’s not all a sea of confusion out there. Take Mad Hatters, for example, they want everyone, over 18 that is, to have a good night. And what’s the best way to do that?  Easy, put it into the hands of Netsounds Unsigned who bring us Takeover #4 with three top, up and coming acts on Friday November 30th. Mind you that still gives some people a dilemma on the Saturday night…

The Takeover on Friday 30th November will be headlined by the energetic indie electro sound of The Mouse That Ate The Cat with special guest Kobi Onyame and support from Inverness electro heroes The LED.

With influences ranging from David Bowie to TV On The Radio, The Mouse That Ate The Cat produce instantly catchy “indietronica” that makes them one the best in their field with four of their previous tracks picking up play on national radio (BBC Radio 1).  The duo formed in 2010 and is made up of Colin Keenan from Drive-by Argument and Brian Henderson of The Dykeenies.  The Glasgow duo are currently on a short tour of Scotland to promote their brand new single 40 Years From Now.

Special guest for the Takeover is Ghanaian/UK based Hip Hop artist and producer Kobi Onyame who has received huge praise from the likes of MTV and the MOBOs.  He has played live across the UK headlining his own shows and at festivals delivering blisteringly hot performances at T In The Park, Rockness, Wickerman, goNORTH and Glastonbury. He and has opened for a selection of music heavyweights including Kanye West, Tinchy Stryder, Flo-Rida, De La Soul and more.His independently released album Green Green Grasses made the iTunes Top 40 Hip-Hop charts in 2011.  His next single Heartbeat is released on 1st December and has already picked up heavy play from BBC Radio 1Xtra.

Team Inverness is represented on the night by Electro producers The LED.  The electro and dub step duo have been working hard producing new original material as well a string of successful remixes not least their remix of Awolnation’s Sail released through Red Bull Records.  They have developed a live sound that has seen them win over crowds from small venues to festivals including Belladrum Tartan Heart Festival and Rockness.

Takeover #4 is on Friday 30th November at Mad Hatters, Inverness from 9:30pm.  The event is free entry and runs until 3am with Takeover DJs playing a mix of indie, alternative, rock, hip-hop and pop sounds.