The weekend is almost upon us once again, and this Saturday, November 24th, the hotly tipped Colchester four-piece Angry Vs The Bear arrive at Mad Hatters. And by hotly tipped, I mean picking up rave reviews from BBC Radio 1, The Fly and BBC Manchester. Here’s what they have to say:

“It’s a synth-tastic slice of retro pop, sounding rather like the Gossip might if all guitars were suddenly outlawed.” BBC Radio 1

“Angry vs. The Bear, who sound every bit as good as they look – raucous, glitzy, and unashamedly fun” The Fly Magazine

“Angry Vs The Bear chuck out buckets of bravado. Definitely one to watch” BBC Manchester 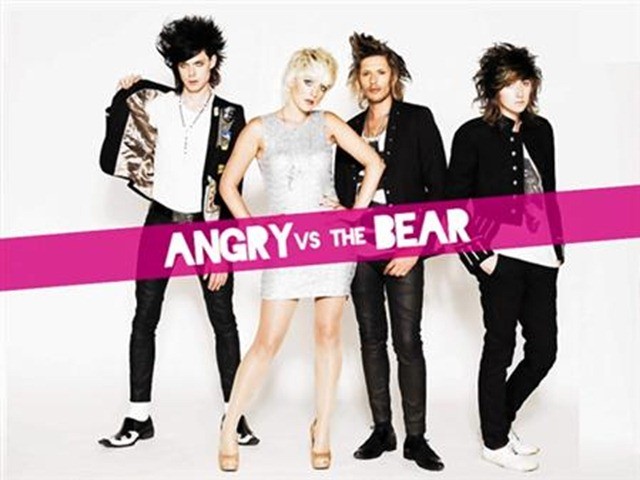 In the band’s bio they describe themselves as follows:

Angry Vs The Bear is frantic. It’s noisy. It’s fizzy electro punk-tinged pop. The female fronted group have been together 4 years and have released 3 singles in the UK. The first ‘Show Emotion’ was picked up by Radio 1 DJ Huw Stephens who made it his Record Of The Week.

The band showcased twice at the SXSW festival in Austin, Texas to unprecedented sold out crowds and Gibson named them their band of the festival. AVB have toured the UK 3 times including numerous festival slots and supported many bands such as Florence And The Machine, The Futureheads, Juliette Lewis, The Hoosiers, Dirty Pretty Things, Twenty Twenty, Neon Trees, Ben’s Brother etc.

The Band’s music is currently the title track on a global TV advertising campaign for Investec bank which is being shown on channels worldwide, Odeon Cinemas and some major sporting stadiums. AVB have also seen their music used in online campaigns for Karen Millen and River Island as well as another national TV ad campaign for Chappelfield Shopping Village.

The band are fiercely proud of their live performances and use innovative technology to ensure their original sound continues to grow with them. This no doubt helped them beat off 100’s of other bands to win the ‘Best UK Live Act’ award at this year’s Rock The House honours ceremony, a Government run initiative judged by top UK major label A&R, Live Nation, Raw Power Management & The Cavern Club, Liverpool. This also made them the first band in history to play a gig at the House of Commons in London.

The band are currently working on their debut album to be released on the 15th February 2013 and are about to depart on their 4th tour of the UK.

To get a flavour of Angry Vs The Bear pop over to their website www.angryvsthebear.com

Check out other Hootananny news.