A review of The Lorelei, and other goings on, at Hootananny, Inverness on the 2nd of November.

Seeing as Mad Hatters wasn’t due to open at 10.30 and having an hour to kill I thought I’d check out the music downstairs in Hoots. Accordion player Gary Innes was playing the first of a two-night stint and as always the folky stuff went down well with locals and tourists alike. Some of you might also know him from his time playing with the Fort William and Scotland shinty teams as well as being a member of folk bands Manran and Box Club. I’m afraid I bailed once he started on the ceilidh dance music, Canadian Barn Dances really aren’t my cup of tea!

On to Mad Hatters and I arrived in time to see Craig John Davidson start his support set for The Lorelei. Despite the small crowd he put on a decent performance and his angsty blend of Americana was reasonably well received. A shame that some chose to heckle him and he seemed understandably peeved about it. A tough crowd to play to and I feel they deserved more credit than they got. 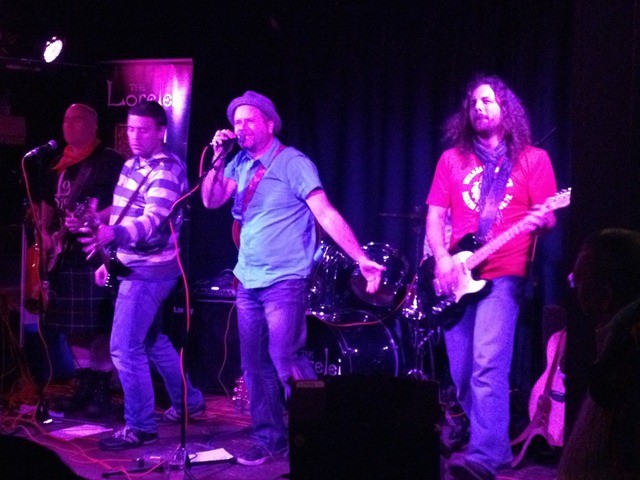 I haven’t seen The Lorelei since my student days in Aberdeen back in 1994 where they were ever present on the local music scene. Well known for their entertaining live sets and energetic folk rock it really was a crying shame that they didn’t make it bigger than they did. A loyal fan base, who are known as ‘Clangers’, stuck with them though and twenty-odd years later they’re still touring, writing new material and selling out venues. Judging by Friday night’s performance they are having the time of their lives.

A couple of technical issues with dodgy cables failed to put a dampener on the set, although lead singer John’s offer to undo a few buttons on his shirt nearly sent people running for the exits! Mad Hatter’s soon filled up and the band’s charm and banter quickly won over any cynics.  The new material sounded as good as anything they’ve done in the past and a rowdy dance floor added to a great atmosphere in Mad Hatters. Some of the aforementioned Clangers were wearing kilts, possibly in tribute to kilt-wearing Mandolin player Flossie. A bunch of kids moshing in kilts really is a sight to behold…

Tonight wasn’t just about The Lorelei though (much as I’m sure they would like to claim otherwise!) but about promoting Fat Hippy Records latest sampler in celebration of 10 years supporting local up and coming bands in the North East. The sampler was on sale on the night with a tracklist including songs by The Lorelei and Craig John Davidson. The Lorelei’s latest album ‘Faces’ was also available for sale on the night. If you missed a chance to grab a copy of either then you can buy them direct from Fat Hippy Records.