A review of Lau at the Ironworks, Inverness on the 1st of November, 2012. 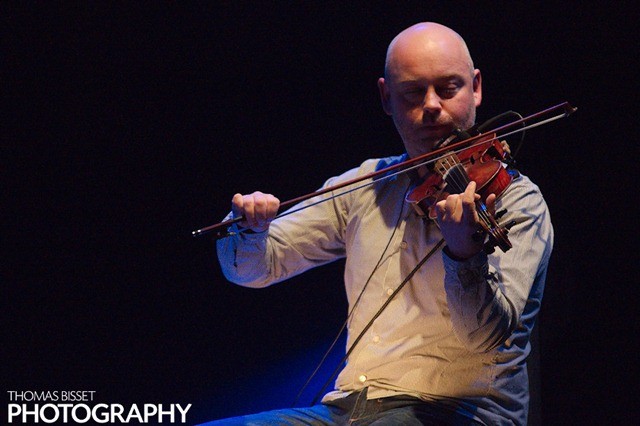 So what do you expect when you hear yet another take on modern Scottish folk music is taking to the stage at the Ironworks? Underwhelmed? Well, it’s best to leave any misconceptions at the door and just revel in the soundscapes that these three free-thinking and talented musicians throw at you. Yup, it’s fiddle, accordion and guitar, but it’s Lau!

Lau are touring to promote their third album “Race the Loser”. It encompasses all the virtuosity you’d expect from Martin’s Green’s accordion; Aiden O’Rourke’s fiddle and Kris Drever’s singing and guitar. However, for the first time there’s a real move into electronic music and soundscapes produced from loops and plain old battering the accordion.

Tonight’s crowd knew what they were getting – the best folk band as voted by Radio 2 for three consecutive years. Lau are at the top of their game and thus the Ironworks decked out with tables and chairs was well packed with those not arriving early needing to stand at the back.

Choosing tunes and songs primarily from their new album, Lau built songs from slow and soft beginnings often aided by Martin’s looping skills to long form pieces, often over 7 minutes long wringing every emotion from the notes. “Far from Portland” stood out in this respect ending with the gentlest of electric guitar accompanied by Wurlitzer piano and fiddle, just lovely. 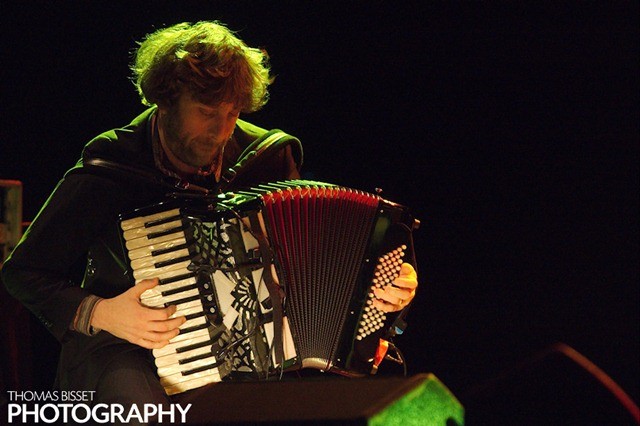 Martin Green is a joker – feeling clever that he can complete junior Sudoko and asking us to believe that the Fair Isle is 1000 miles wide and made of blue tac, it is easy to see that his creativity is not just in his fingers. I caught up with Martin during the evening. Martin confirmed that this was the first, and so far the best, gig of the tour. Looking at their gigging itinerary, these guys work hard. They are taking in much of Scotland and England between 1 and 18 November with only two nights off before returning to France in December.

Their stage presence too brings a glow. In the quieter moments, there are smiles and encouraging smiles while in their more cacophonous moments there is Kris hunching over his guitar, Aiden wagging his legs and Martin bobbing up and down like a demented mannequin. Someone forgot to tell them that they are serious musicians who should be sitting properly on their seats! 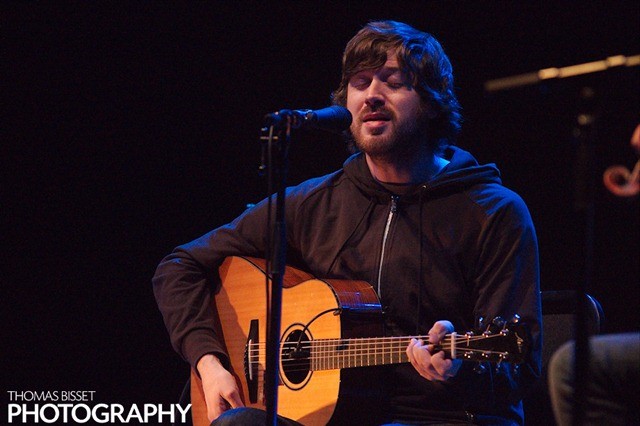 And then there is Kris Drever’s vocals. A number of bands playing modern Scottish music produce almost exclusively instrumental music. While Lau are hardly exponents of Abbaesque melodies (maybe that’s for the next album) they use vocals as layers within soundscapes as well as songs such as Saint Monday which allow Kris’ vocals to shine through. At one moment there was such a wall of harmony vocals that I thought the Eagles had arrived.

In true merchandising style, Kris and Martin tended the stall where they were selling CDs, Videos and T-shirts. They were happy to spend a few minutes with fans chatting and signing autographs. If tonight’s audience is anything to go by then Lau have a real and lengthy future – people ranging from their teens to much more mature had CDs flying off the shelves.

So, those who have heard that this genre of modern Scottish music has too many bands eeking out a limited existence have failed to account of Lau’s lush sound, their beatleslike use of loops and the sheer racket that they can make when they put their minds to it. Race the Losers? There’s none here.