It’s easy to wax lyrical about Bombskare, anybody who does not, has not seen them yet. We last saw them play a full set at Hootananny at the beginning of the year so the opportunity to see them again, at Bogbain on the 27th of October, fill us with more than a bit of excitement. Better still we managed to catch up with the band before their forthcoming Inverness gigs. 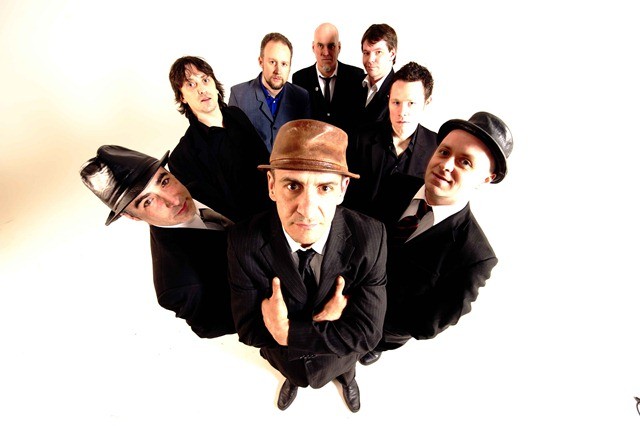 How’s your summer been?

This summer was great.  We’ve played a few festivals we haven’t been to before, and a few that we have.  We went to Kendall Calling which was a first.  Great place, great festival.  We were also at Silloth Beer Festival, both festivals are down in Cumbria.  We played at the Downhill Downtown mountain bike world cup with our buddies Stanley Odd.  We played at the Up Helly Aa festival on Shetland.  We also returned to the Kelburn Garden Party, the Audio Soup Festival, Belladrum Tartan Heart on the main stage, and Eden Festival.  I’m probably missing a few.  Not to mention all our usual hit and run gigs across the country; we were down in London earlier this summer and we’ve played Glasgow about six times this year so far and our usual appearance in The Burgh which is always excellent.

We were trying to find a bit about the origins of Bombskare, but failed, can you tell us about how you came together?

I’m not an archaeologist but I’m told we were formed around the time of Charlemagne.  That would make us over twelve hundred years old, which feels about right, but until we get round to carbon dating Papa Joe, our oldest member, it’s all just speculation.  You might not realise this, but Ska music before the Middle Ages was quite different.  It was slower for a start, with a lot less electricity.

What do you think of the Ska scene in the UK at the moment, are there any acts that particularly stand out?

To be honest there isn’t really much of a Ska scene up here in Scotland.  There are great individual Ska bands who create their own scene but I’m not seeing a Ska scene as such.  Down south it’s different, there are many more bands, but up here the whole music scene is smaller, and so sub genres like Ska or Punk just tend to get lumped in with other music generally.  We hardly ever play with other Ska bands these days, we’re always on a bill that has a fairly broad mix of music styles.  But there are great bands out there, Ska and otherwise.

Outside the genre is there any guilty pleasures (music wise!!) that you can admit to?

There are so many listening pleasures, none of it guilty, I don’t think I could list them all.  We are all listening to so much different stuff and it influences all the music that we play.  Over the years we have done cover versions of Mozart, Deep Purple, Stevie Wonder, The Bangles, Sublime, Slayer, Devo, Faith No More, Gene Krupa, Marillion, Marvin Gaye, Frank Zappa, The Beatles, Queens of the Stone Age,  Elvis Costello, the Sensational Alex Harvey Band, The Beastie Boys to name a few.  As far as we are concerned all music is there to be improved with Ska.

We love the quote on the website that you “leave every stage like Tokyo following a visit from Godzilla” how do you guys maintain your passion for the music?

How do you guys explain the loyal support that you guys have garnered?

That’s easy.  Alcohol. And playing live – a lot. Seriously, we have no idea why people follow the band so loyally.  Fan is short for fanatic, so I imagine the people that support us have mental health issues.  What we do is a form of care in the community if you think about it.  It’s a shame really.  I blame Thatcher.

What are your plans for further recordings?

We have just finished our second full length album which should see the light of day early next year.  It’s called ‘The Day The Earth Stood Stupid’.  We’ve been recording it off and on for the last three years but its finished now, just waiting to get the artwork done, so we’re all pretty excited about that.  I have to say, it’s sounding pretty damn good even to me.

Given that you are playing one ,relatively, new venue in Aces and one newly awarded “Best Unusual Venue” in Scotland in Bogbain, what is the strangest venue you have played?

We’ve played a few strange venues in our time. We played on the back of a flat-bed trailer at a farmer’s market in Nairn one time. That was interesting because every time someone jumped, the metal decking flexed and popped which vibrated up the mic stands and through the PA. It sounded mental. We played in a boat shed in Govan this year, that was unusual. We once played in a former strip bar in Dundee. Very classy.

You can see our last review of Bombskare.