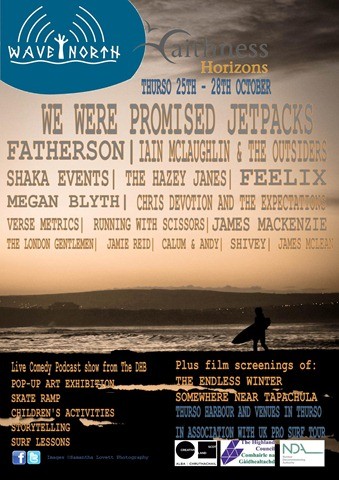 The event , which coincides with the Thurso Surfing Championship, will mix music with other arts and a dash of a pirates theme.

Musically, Friday will see Edinburgh indie rockers, We Were Promised Jetpacks, cap off a busy 2 months which also sees them tour America, Europe and the UK.They will be headlining in the festivals largest gig to date, Skinandis Nightclub. WWPJ will be joined by Fatherson, who continue their rise in popularity. The Skinny eloquently describe the routine “The Kilmarnock trio do their alternative rock-meets-powerpop thing, you do the moshing”.Also on the bill will be Running with Scissors.

Saturday the 27th will see a pirate themed party at the Newmarket Bar with live music coming from Dundee based, The Hazey Janes whose collaboration album, with singer/songwriter Michael Marra, Houseroom was released in March. They will be joined by Iain McLaughlin & the Outsiders, fresh off an impressive performance supporting Status Quo

On Sunday Sheffield based duet Feelix, quoting influences such as Ed Sheeran, Christina Perri and Gary Go, their debut album was released in September. Also on the bill will be Jamie Reid, Shivey and Chris Devotion and the Expectations and  Inverness based singer song writers Megan Blyth and James Mackenzie