The Lorelei and Craig John Davidson play at the Fat Hippy Sampler Volume IV at Mad Hatters, Inverness on the 2nd of November.

Aberdeen based Fat Hippy Records celebrate being ten years old by releasing their fourth sampler and bring a couple of the featured acts up to Inverness. 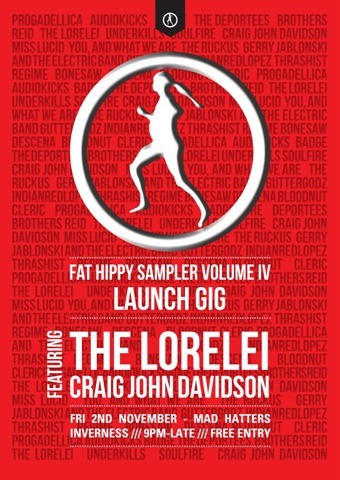 We’ve only ever seen The Lorelei once, and they were the stand out for us at Wizard 2011, they made a similar impression on Jim Kennedy when he reviewed them at Loopallu this year. They are no new find, however, having been on the go since 1990 (albeit splitting and reforming during the time), their years have not seen them slow down in the least. Expect an energetic set that or as Time Out described them they are like “The Waterboys after too much marching powder”. The energy that they exude is definitely infectious indeed Flyinshoes described them as being “armed with enough instruments and sense of purpose to ensure that no prisoners will be taken”

They will be joined on the night by  singer song writer Craig John Davidson. Clearly a man with a mission and a passion describing himself as have an “intelligent eye to the problems in modern society as well as interpreting the influences and challenges most young citizen meet today”.

The Lorelei and Craig John Davidson play Mad Hatters on the 2nd of November, doors 9pm.