A review of Treacherous Orchestra playing at The Ironworks, Inverness on the 5th of October, 2012. 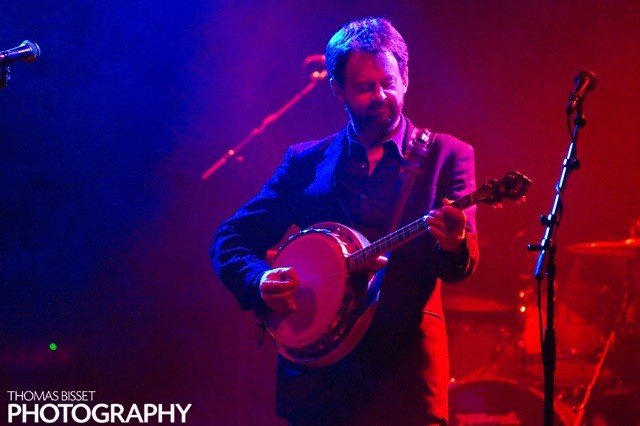 Tonight Celtic supergroup Treacherous Orchestra were back in Highland not long after their main stage appearance at Belladrum in August this year. They are working hard to promote their debut album, Origins, released in February of this year to almost unanimous critical acclaim.

These guys comprising some of the top stars in Celtic music from both Scotland and Ireland brought their eclectic mix of mostly original tunes that have a sound reminiscent of Gong, Gary Clail, Pink Floyd and even a touch of Chou Pahrot (remember them?) all the while playing what is very obviously Celtic type tunes. They remind me of the Peatbog Faeries with maybe a less obvious dance beat but retaining the use of sound and percussion loops. Indeed a number of their sets begin with an IDM type sound loop, not least the introductory “Overture” which led straight into “March of the Troutsmen” these pair also being the first two tunes on the aforementioned CD. 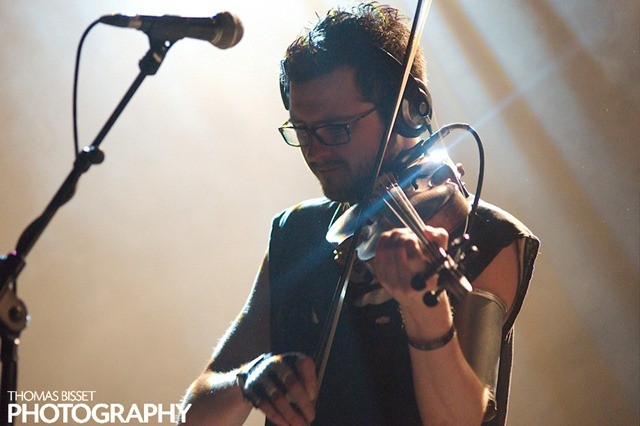 The use of evocative lighting, smoke and even a bit of strobes made all the difference to me from the set they played at Bella. Here was a band in complete control of their environment, creating an ambience of not just music but also a “feel”. From light frothy tunes through to powerful and brooding epics not a million miles from heavy rock (albeit without distorted guitars) flitting from eastern sounds to modal and harmonic minor tunings. Sounds clever, and indeed it is, but it is none the less musical for that.

What impressed me most was their ability to have so many musicians on stage at one time (12!) and yet for their still to be space in the arrangements for all of the instruments to shine – 2 pipers, 2 fiddlers, (only)1 banjo, 2 guitars, 2 drummers, double bass, and 2 flautists. There was barely room for them to move! But yet their sound was not overcrowded. Sure, the fantastic pa at the ironworks didn’t hinder them but their sound had breadth and depth throughout. The interplay and building of complex arrangements was sometimes spectacular and even had some death metal types headbanging! 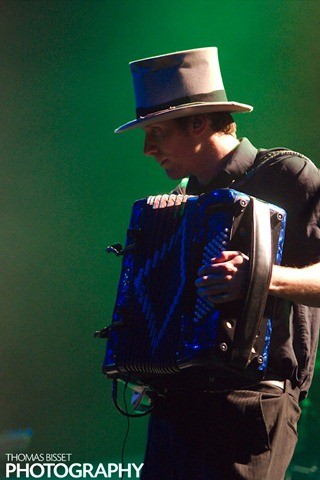 So who are all these guys? Treacherous Orchestra are based in Glasgow where a melting pot of traditional musicians, composers, sound engineers came together. We are talking about Ross Ainslie, Ali Hutton, John Sommerville, Eamonn Coyne, Kevin O’Neill, Adam Sutherland and more. It’s a bit rude to name some and not others as all of these guys have strong individual backgrounds and are no-one’s side-men.

On the night, highlights for me were Easter Island which brought a more delicate side to the band and “Superfly” where pipes and then fiddle combine to a raucous conclusion. However, any number of the tunes on the CD were played note perfectly and live showed a level of power and authority that the CD lacks. Live, too was a chance for folk to dance. Having said that, these guys don’t do 4/4 time for any length of time so it’s actually quite a challenge to dance to. But a few brave souls had a bash though the majority stayed at their tables.

After the gig, the band mingled in the foyer selling merchandise and chatting. I snatched a few words with Dr Eamonn Coyne (an actual real live Dr btw) who gushed about coming to Inverness and the Ironworks. He reminded me that Lau were coming next month – another band that shouldn’t be missed.

Check them out on the Treacherous Orchestra website and you can see them next at the Inverness Hogmanay celebrations.