Newton Faulkner returns to the Inverness Ironworks on the 4th October to capture your heart with his charmingly dreamy brand of pop. 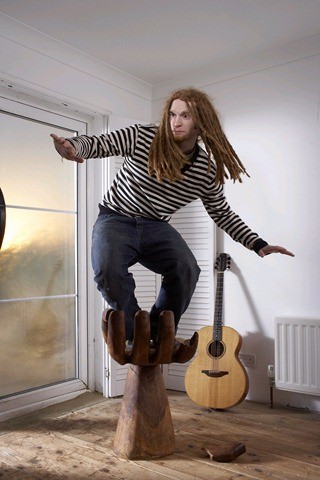 Faulkner rocketed into the scene with debut album Hand Built By Robots which received worldwide recognition, not to mention number one in the UK album chart and showcase his spine tingling tracks ‘Dream Catch Me’ and a magical cover of Massive Attacks ‘Teardrop’ which were infectious after the first listen.However its the Academy of Contemporary Music Graduate’s technical skills that have wowed listeners with his highly emotive voice shining through.

has seen Faulkner collaborating with some of the newest and most interesting writers and players with the result being a highly personal album crammed with ballads, guitars and heartbreak.The most intriguing thing about Newton Faulkner is his completely unique live show which has included cameras, backlit screens and even a working cassette player but what’s more important is what he doesn’t use, don’t expect to hear any backing tracks – what you see is what you get.