Eddie Richards aka “Evil” Eddie plays Karma Lounge on the 6th of October. 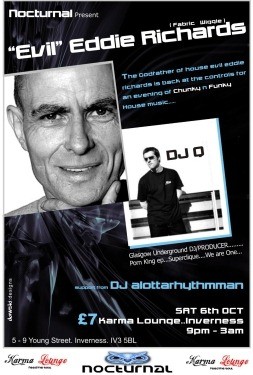 Evil Eddie has been described by Mixmag as “Britain’s godfather of house and techno”, he has played in seminal clubs such as the Hacienda, Clink St. and regularly plays Wiggle at Fabric. Marco Giannini notes Eddie’s significance to the genre saying he”is an integral part of the modern House scene, he has been around from the start and has played a pivotal part in the scenes movement.”Indeed there is no sign of him tiring after 3 decades behind the decks, this summer has seen him play various venues in London as well as Spain, Slovenia and Ukraine.

Support for the night comes from DJ Alottarhythman, tickets are priced at £7.