Gary Beck has announced that he will be playing UV Night Club Inverness on the 2nd of November. 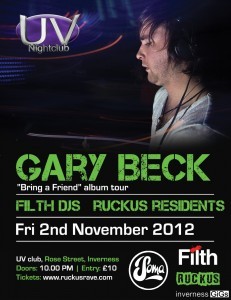 This is the biggest announcement from the recently opened venue in Rose Street. Gary, one of the most prolific and inventive producers in the scene, has of course played Rose Street in 2011 so whilst the name and the decor has changed at least he will know where he is going! The gig is part of the “Bring a Friend” album promotion. Beck on talking to The List about the album said ‘The album’s been in my head for three years, although initially I did something that was maybe more suited to a television soundtrack, something more down-tempo. But I spoke to people who suggested I should keep it a bit techno, so I kept chopping and changing, and eventually it came together quite well as a mix of everything.’You can buy the album here.

Tickets are on sale via www.ruckusrave.com at a advance price of just £10 (inclusive of p&p and fees). Further details will appear on the Facebook event’s page.

We were lucky enough to speak to Gary in an interview last year.