Mark Ronson will be bringing his electrifying DJ set to the Inverness Ironworks on the 8th December. 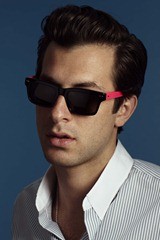 Ronson made him name as a DJ in the New York club scene in the nineties where his innovation to mix genres from rock to hip hop won him the adoration and respect of many. It’s no wonder he was snapped up by Elektra Records.

The celebrity DJ’s set brings the obscure little gems of unknown bands to the nation and on top of that he is a world renowned producer who has pushed pop’s Amy Winehouse and Lily Allen into superstardom.

However its his second album that gave Ronson the recognition he deserved, with cover songs that were a million miles away from the originals, ‘Version’ created waves in the UK music charts and showcased him as much more than a stylish suit and celebrity DJ.

The multi Grammy and Brit winner’s magnificent DJ skills have not be forgotten though and has been seen around the world including at the legendary Glastonbury and BBC Electric Proms. Ronson’s set not only sees him bouncing with excitment but also sends the crowds into a dancing frenzy.

Tickets are on sale now via www.IronworksVenue.com