Roads to Damascus are five piece rock band from the North-East , whose first album was released in 2009, describe themselves as “strong on tunes, performance, personality and ideas”. We spoke to guitarist and writer ,Calum ‘Cammy‘ Jamieson,  prior to their appearance at the Battle of the Bands at the Eagle. 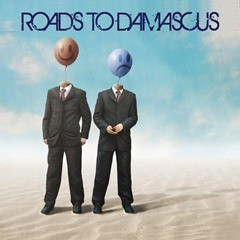 The competition place fufils the bands desire to play Inverness “this kind of event is ideal” Cammy explains “everyone attending knows that it’s going to be a short set of originals and hopefully no-one will ask for some AC/DC!!”. Whilst the band have been on the go for three years which benefits the band, “we’ve all been doing this a long time and we feel like the music is becoming fresher as we mature.” although he urges “There’s a difference between maturing and getting old!” An obvious question would be what keep them going Cammy replies “Having day jobs keeps you motivated”

The second Road to Damascus album, also known as “R2D2” , came out this year, the  DPRP.net review noted “ All the ingredients are here and ready to be mixed into something even more appetising.” Plans are certainly afoot: “We’re really at the ‘talking about it’ stage at the moment. There are a couple of demos floating around that Steve (Sims, Vocals) is very keen to rework and I have a few sounds in my head that I’d like to get to…It will probably take about a year of to-ing and fro-ing before we have something we all are happy to release, but it will be a progression from R2D2 and RTD1.”

If you have not experienced than band and their music before Cammy states“ ‘The Early Hours’ is really the one for me. The music progresses and builds and the song hasn’t got that verse-chorus-verse kind of feel to it.” although you won’t have heard it at the Battle of the Bands “ We simply haven’t got the stage time to include it on Wednesday though, I’m afraid.”

The band are currently raising funds to re- release the first album “I’ve re-mastered it and the new artwork is in place…we just need some funds to get it pressed and sent to the record company. Anyone who buys it up-front will get their name on the album credits as a thank-you from the band.” For further details see the Roads to Damascus website.