Market Bar hosts an eclectic night of entertainment with  The Desecrator, Toby Michaels and Hamish Roberts on Wednesday the 12th of September. 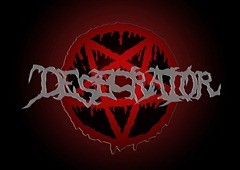 The Desecrator (aka Mark Dubanowski) brings his mix of thrash, black and death metal influences back to Inverness as part of the Darkness Is Upon Thee “Mini-Tour”. Since his first gig in March he has supported Diementia, Razorblade Smile and Reflection in Exilejust to name a few, hosted the Highland Death Metal Tea Party, and even made a brief appearance at this year’s Belladrum Festival .

Joining him on the bill will be a relatively rare appearance (at least recently) of Toby Michaels, without his Rolling Dammed. An opportunity to hear how his recent work with his band has impacted on his acoustic performance. No doubt there will be a little bit of what you fancy.

Contrasting with the rest of the evening will be opener for the night “classical guitar virtuoso”, Hamish Roberts.

You can read our features with The Desecrator and Toby Michaels.