Rachel Sermanni plays HMV, Inverness on the 22nd of September to promote her new album “Under Mountains”. 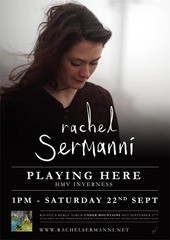 Rachel played HMV as part of the promotion for her much praised EP “Black Currents” earlier his year (see photos of Rachel Sermanni at HMV). Since then she has continued to go from strength to strength with a unenviable touring schedule, building momentum to her forthcoming debut album release “Under Mountains” which recent received “ten out of ten” in a review from Clean Slate Music (Preorder Under Mountains

The forthcoming performance on the 22nd at 1pm will be her final Inverness show of the year in the town, after a sell out performance at the Ironworks, so the place is bound to be busy, you have been warned.

A review of Rachel Sermanni at the Ironworks.