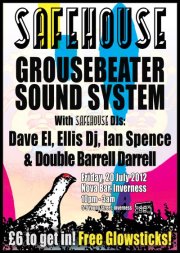 We talk to Jackie Mackay about the forthcoming return of Grousebeater Sound System (GBSS), accompanied by Safehouse DJs, this time to NOVA on the 20th of July.

We start by talking about Safehouse and Jackie is proud of the crowd that Safehouse pulls in, with a recent night proving to be one of the busiest at NOVA so far. Part of the reason for this is the occasional nature of the gigs, which helps to “keep it fresh”. As such Jackie was clear that this will be the last Safehouse gig for a while, with no fixed plans for another date, although there will more than likely be another gig before the end of the year.

However Jackie is keen to emphasise the crowd coming to the gigs that make it special, “the people that come along are just fantastic” with a mix of people that have been coming for years and a newer support.
Safehouse, Jackie explains, is not just about techno “it’s sort of fun, the DJs are not serious about what they do”, making reference to the mixes that they create. Avoiding the norm, the DJs are known to pull from random sources such as the Prince of Bel-Air. The emphasis is clearly on fun and Jackie is clear that the Safehouse Djs know how to enjoy themselves being as comfortable on the dance floor as behind the decks.Indeed the night coincides with Ellis Dj’s 30th birthday which will no doubt add to the party atmosphere this time.

Talking to Jackie about her influences from indie to reggae, and of course techno. But catching something she hasn’t heard before,  also gives her a buzz, using as an example her first experience of seeing Bombskare live converting her to the merits of ska. Locally, Jackie spoke highly of Polymath and what he has been doing “although he has been doing well he doesn’t turn his back on local stuff.. it hasn’t go to his head yet” she playfully adds. Conversation led to the local music scene in general she paid credit to the local music scene and the supportive nature of it. Jackie spoke of the Cake era and the role that NOVA has played in reigniting the club scene.

Returning to the forthcoming night at NOVA and here is no hiding Jackie’s support for GBSS “they’re our friends”, with Safehouse having played with them on several occasions in the past, most notably last year at Cake. The night came about when Neil (from GBSS) approached Safehouse to play a gig in July, an offer which Jackie could not turn down, even if there was the small case of Jackie’s wedding in the next month. “It’s always a great atmosphere with those guys”. GBSS are well known on the circuit bringing their brand of modern dance with traditional Scottish styles to numerous outside raves, private parties and festivals.

There is no doubt that there will be a party on the 20th of July, tickets are priced at £6, with the now legendary free glowsticks.

You can read our interview with Grousebeater Sound System from last year here.