We managed to catch up with New Town Triptych prior to their visit to Mad Hatters, Hootananny, Inverness on the 13th of April.

Last time we heard of New Town Triptych was when speaking to George Campbell (see The Side talk to invernessGiGs) so it’s great to hear that his band are coming back up to the area and especially kind of them to give us some of their time.. 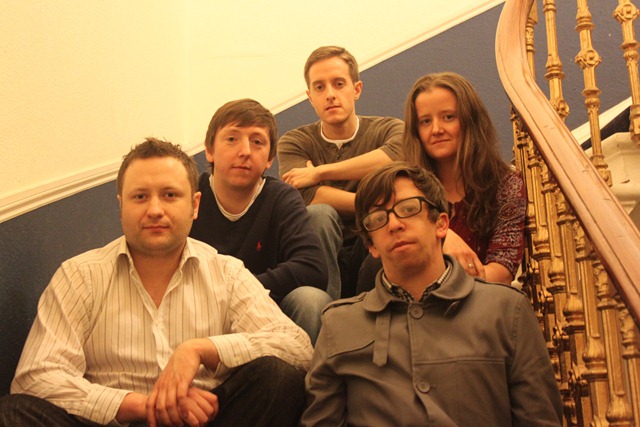 You described the first gig on your forthcoming tour as the first steps toward World Domination, how’s it going?

Well, so far we’ve got the minions of dubious loyalty, the faceless, mindless drone army and the black PVC costumes, not to mention the physically improbable and gravity-defying floating platforms from which we will play our music to the waiting world. Now if only we could find that perfect evil lair… We’ve heard volcanoes are good (for the savings on heating bills alone), but we’re willing to be flexible.

How has the addition of George Campbell (formerly of “local heroes” The Side) developed the music of the band?

Actually not at all, we are massively disappointed with George as a musician, and a person in general he is pretty awful… lol, seriously though, it’s been great so far! We were a 3 piece when George joined and we thought it would take a while to introduce a new band member, but after 2 practices he had the set sorted and we played our first gig with him after 3 weeks! Considering we had been playing as a 3 piece for 18 months at that time, we had the smoothest transition you could wish for. George brings a big personality, incredible talent and endless enthusiasm, not to mention a further broadening of our musical influence and style. Since George joined we have also brought in multi instrumentalist and songwriter Kev O’Hagan. So Kev will be with us for first 5 piece gig in Inverness. Can’t wait!

Can you tell us about the new double A side single of ‘Never Again’ and ‘Simple’?

Hmm, First thing to say is it is FREE! (warning: shameless plug alert! newtowntriptych.bandcamp.com). The second thing to say is that we think it represents some of our most advanced work to date, as it was the first to include piano/ keyboard parts and more complex vocals. It was also a step in a slightly different direction for us, as our previous work (like our immediate future work) was recorded, produced, designed and marketed by our own band members.

With the addition of our 2 newest members we want to keep getting better and better at what we do. We’re pretty sure this is the case but it’s hard to judge from the inside… so why not have a listen to our back catalogue and tell us what you think!

It’s your first time up here, any particular reason why it’s taken so long?

The programme for World Domination does rather dictate our touring schedule and the unending search for minions, paraphernalia, etc., kept us away. However, it is time for the great wrong to be righted and having got wind of a potential evil lair up for sale in the vicinity, we are on our way!

Hmm… did that sound convincing? Well, the alternate answer is that we did do a Highland tour last summer that took us to Kintail, Portree and Thurso with our good friends and cracking band Verse Metrics. We had intended to play Inverness also, but alas the organisation of the gig fell through very late in the day. We were pretty gutted as we had heard many great things about gigs in Inverness.

We noticed that you are in the process of finishing some new material, how is it sounding?

Well, we think it sounds pretty good, but we are probably a little biased! We are planning to play two of the new songs for the first time at Hootenanny’s and hopefully the audience reaction will give us some pointers. Come and grab our ears after the gig too, and let us know your thoughts. They’re called “Rosie” and “Killer Instinct”.

Is there a song of yours that would most tempt folk to come and see you at Mad Hatters and if so why?

That’s a tricky one as most of us haven’t yet had the pleasure of playing Mad Hatters! If you’re into your folk sound, maybe “Killing Time” or perhaps you’d prefer the more rock influenced “Just how You Designed”.Both of these were on our first release in January 2011. Or if you like a chilled, melodic sound, maybe our later release “Climb” from June 2011. Alternatively you might just want to go for Never Again/Simple featuring your own local star, George Campbell!