Review of The Coffee Shop Open Mic Session  at The Greenhouse, Dingwall on the 16th of February, 2012 by Matt Sillars Photos by Mark Dubanowski

The COFFEE SHOP OPEN MIC SESSIONS have moved from Strathpeffer to the Greenhouse Community Shop in Dingwall High Street. The 2nd session took place on the 16th Feb and featured an impressive array of performers leading up to Adrian Telfer in the special guest slot at the end of the evening. 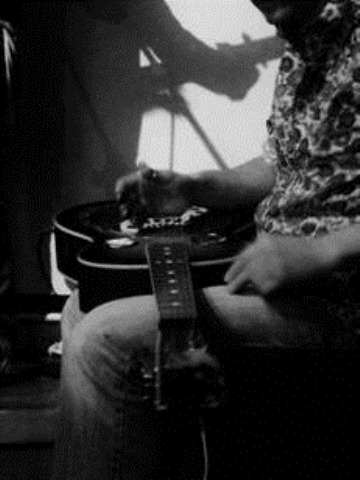 Coffee Shop regular James Maybee opened the night with self penned songs on friendship and heartache… the stuff of all singer-songwriters!

Brand new to performing on stage,Scott Marshall, followed with a song of love and trains… with a great voice, great look and by the looks of it a great future, we are looking forward to hearing more.

Greg Miller and Dean Morrisson plugged in for some post punk indie. Greg plays great running bass lines under Dean’s understated guitar and together they make a punchy sound. They have since been picked up as support for De Horsfall on the 27th February at the Greenhouse.(for details of the forthcoming gig see: Des Horsfall comes to the Greenhouse)

With a switch to a country sound Dave Newsome and Elizabeth Garrow performed three numbers as Eye to Eye. Songs from Ronnie Lane and Emmylou Harris with harmonies, country rock licks and lots of bravado!

The piano playing singer songwriter Josephine Sillars played her tribute to fallen soldiers and the futility of war, ‘Ghost’, and followed this up with a cover of Nina Simone’s ‘Feeling Good’. Josephine is a Coffee Shop regular who is also playing one of the Saturday spotlight sessions on the 17th March. You can see a review of a recent gig at Josephine Sillars plays Glachbeg.

Howard Swindell is a master of the comic song and entertained everyone with his self penned Library Van Driver Song and a recounting of Jake Thackray’s ‘Sister Josephine’ – about a gangster on the run who hides dressed as a nun. Written long before the Sister Habit films, this is a bawdy tale! Howard was joined by Rhythmnreel’s Jim Kennedy and they connected really well with guitar, fiddle and voice on Jim’s song of the Iolaire tragedy. We look forward to more from them soon.

Kelvin Ross gave us two self penned Scottish ballads charting the battle of Culloden and the travels to the battle of Trafalgar by a namesake in Nelson’s navy. Kelvin reckons there needs to be more songs written about Culloden – and he seems to be the man to do it!

Adrian Telfer finished the evening off as the main act. Giving us song after song of contemporary highland life he was witty and at ease with the audience. A local singer-songwriter who cut his teeth in the Kilcoy Arms, Adrian’s songs take a slice of local Ross-Shire life and mix this with songs of sailing, lost love, Black Isle brews and comedic patter, he is a pleasure to listen to. You can read our Interview with Adrian Telfer on the link.

The Coffee Shop Open Mic Session return to the Greenhouse on the 1st March with Sara Bills as the special guest.