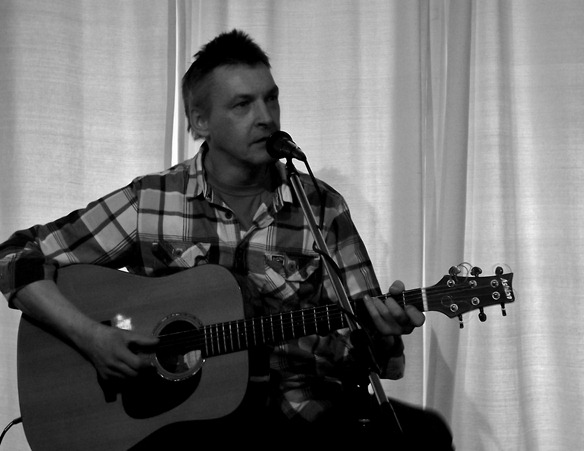 Every Saturday brings music to The Greenhouse, with the sessions hosted by Rob Ellen and the Medicine Show, this week, we had Steve Eaglesham. A songwriter from Evanton, Steve is the older brother of the Ross-Shire musical dynasty that fostered Wolfstone and his band for many years, The Pagan Poets. Now, Steve Eaglesham is setting out on a solo songwriter’s trail, with The Greenhouse being the first venue he has played a solo set in for 18 years!

A simple set-up was seen on the stage, with just one-man, his guitar and a small PA system. A power cut early in the day threatened to make the show a completely acoustic session, but the issues were resolved before Steve took to the stage.

During the first few songs of his set, it was apparent that Steve seemed slightly nervous, which was natural, considering how long ago he last performed a solo set. However, he was soon in his element, performing a variety of songs of different styles. There was a blend of blues, country and folk in Steve’s music; the fantastic ‘Vagabond Blues’ was, apparently, written in between his shifts as a chef. ‘Baltimore Babe’ was a country number that, despite never having heard the song before, felt and sounded familiar. It was certainly a song you felt like you could just sing along with, without actually knowing the words.

To me, it was clear that Steve was quite the storyteller, singing about past experiences; tales of growing up in the shipyards and the days of running a pub and locking himself in, with a bottle of whiskey after closing time, amongst other subjects. In fact, the second song in the second half of the session was a folky, self-deprecating (“Not self-defecating”, he jokes) tune called ‘Right Place, Wrong Time’. The highlight of his set was his unique song about getting off the common 9-5 rat race, called ‘Precious Time’, which started off with him doing spoken-word narration. A bit of “Ross-Shire Rap” if you will!

The best part of this afternoon was the amount of appreciation shown by those who took the time away from their busy lives, and sat down to absorb everything Steve Eaglesham had to talk and sing about, hanging on to his every word. And, with his first solo set in 18 years now under his belt, I’m excited to see what the next few months have in store for Steve.