Des Horsfall to play The Green House, Dingwall on the 27th of February. 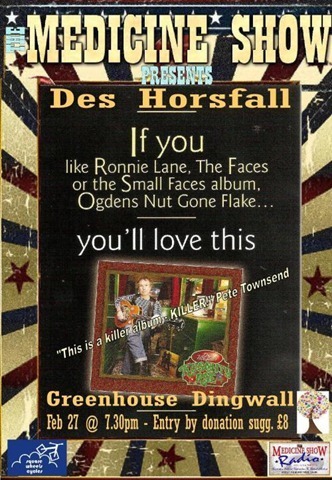 Des Horsfall is described as a “rustic-rock’n’roller” biding his time with bands such as Raw Deal and Turbo.He has supported the likes of Steve Earle, Emmylou Harris and Little Feat, whilst being seen regularly on Country Music Television and VH-1.

His most recent album, released in 2011, was a homage to the Small Faces and Faces bass play, singer and co-writer, Ronnie Lane. The album entitled ‘The Good Gentleman’s Tonic’ which was described as “skilfully-executed, melodious and wise” (see the Des Horsfall review).

Des will be joined by Andy Mckerlie who together are known as the acoustic Kuschty Rye. Between them they cover six and twelve string guitars, resonator, mandolin, keyboards harmonica and dual vocal.