Preview of Band of Skulls, who will rock the Ironworks on Thursday 23 February, by Jim Kennedy. 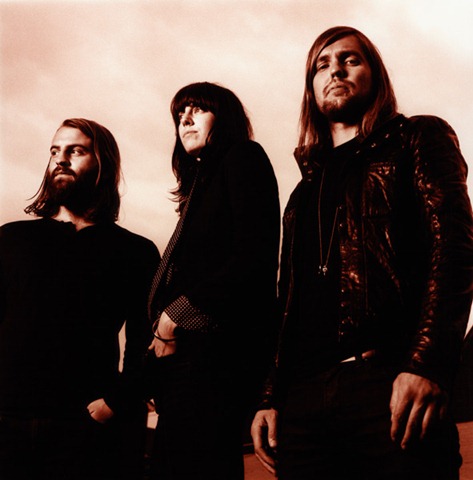 Band of Skulls meld rock, psychedelia and indie into an atmospheric maelstrom of powerful and melodic songs with shades of Biffy, White Stripes and Black Keys. The 3 piece comprising Matthew Hayward (drums), Russell Marsden (Guitar and vocals) and Emma Richardson (Bass and vocals) hail from Southampton and were formed back in 2008 when the boys bumped into a sleeping Richardson at Art School. A chat about music and Richardson took up bass guitar!

Their current tour kicks off in England, into Scotland and Ireland and winds up in USA in April. Far cry from their early days playing in Southampton to often ambivalent audiences. Emma talks about baring her soul in her songs and an amazement that people now actually like them. Emma is also a bona fide artist with her first exhibition also taking place this very month in London. The cover shot of the new CD is of a glass sculpture inspired by one of her paintings. The boys admit to just hanging out at Art School.

‘I know what I am’, an ITunes single of the week back in 2009. It was downloaded over 350,000 times and spawned a North American tour. Their profile in America is such that their song, ‘Friends’, was included in “New Moon” of the Twilight movie saga. Heady and career making stuff!

The new single “Sweet Sour” is out on 21 February. It has amassed well over 100,000 views on youtube already. You can hear the single as well as their entire new album along with Russell’s comments on each song (see Band of Skulls track by track review). We think you’ll like it! Russell says of the new songs that they are “beefier for bigger stages”. Beefy they may be, but there’s also a sentimental and lyrical side not heard on their first album.

Band of Skulls will be ably supported on the night by Broken Hands. A very new band from Kent – their first ever gig together was only in August 2011! Not bad work. You can hear them and download one of their tracks for free on their Facebook page.

Band of Skulls will rock the Ironworks on Thursday 23 February. It might well be worth seeing them before they go global. Tickets re available at www.IronworksVenue.com