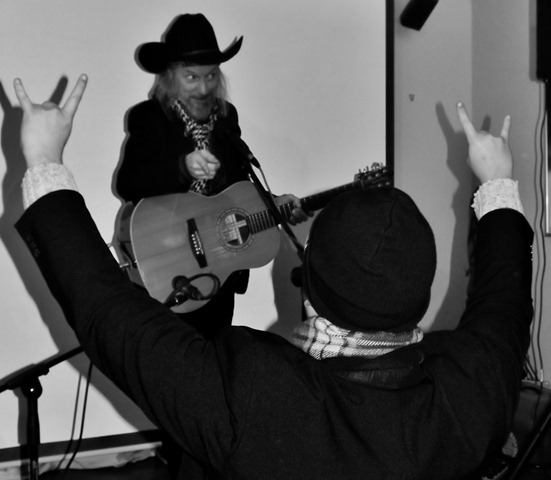 The last month at The Greenhouse has been a rather musical one, with the move of the Medicine Show sessions to the Dingwall-based community shop. Earlier in January, we had Nashville country singer/songwriter, Mike Cullison, and gypsy jazz quartet, The Highland Hot Club (see – Things get Hot in the Greenhouse), both take to the stage of The Greenhouse. However, tonight was all about the work of “The Mighty King of Love”, Phil Lee, who was appearing as part of his “I Saw Him Before He Died” European Tour.

Before Phil could take to the stage, however, we were first treated to a solo set from Highland Hot Club member, Steve Mckeand, who really impressed me with his lead guitar work and vocal abilities with the Hot Club a few days prior to this show. Expecting to hear mostly Highland Hot Club songs, played with just guitar and vocals, I was pleasantly surprised to experience a set full of Steve’s own material, a few covers, and even one or two “Hot Club Hits” thrown in for good measure. 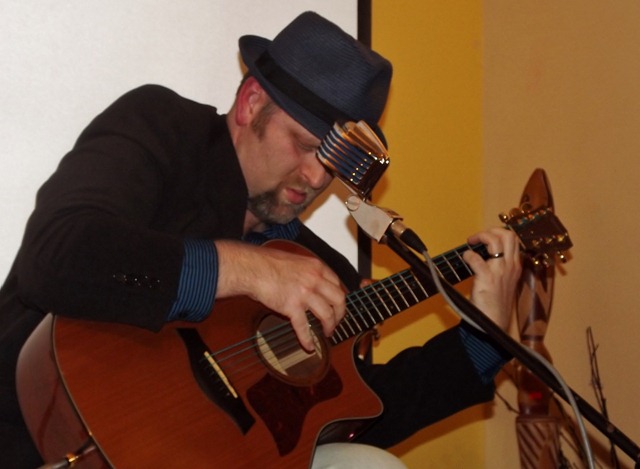 Steve’s sound was actually best described by his wife, and fellow member of the Highland Hot Club, Evelyn as “an ‘all-round’ eclectic mixture of finger style and flat-pick guitar, encompassing Meryl Travis, Chet Atkins and, of course, the Django Reinhardt gypsy jazz style”. The soothing melodies of ‘This Heart Of Mine’ echoed through the room, whilst ‘Floating Along’, a song claimed to be written in the midst of tearing down the tent in torrential rain at last year’s Belladrum, made me feel like I was sitting on a beach and watching the world go by.

However, the main highlight of Steve’s set was the inclusion of the brilliant ‘Ode To James Taylor Wannabees’, a parody aimed at the self righteous, over-confident singer/songwriter types, which the audience responded well to.

After a brief intermission, it was time for Phil Lee to grace the stage. Having heard a lot about him, yet not having had a chance to check out his music, I suspected that I was in for a big treat. My suspicions were confirmed when the Nashville-based singer/songwriter played through songs like ‘The Mighty King of Love’ and ‘25 Mexicans’. The combination of vocals, acoustic guitar and the harmonica provided for a rather unique performance. Think Bob Dylan-esque rock n roll, blended with country/western. Indeed, the country influence shined through more during the likes of ‘Jemima James’, when Phil switched the acoustic for his Dobro resonator guitar. 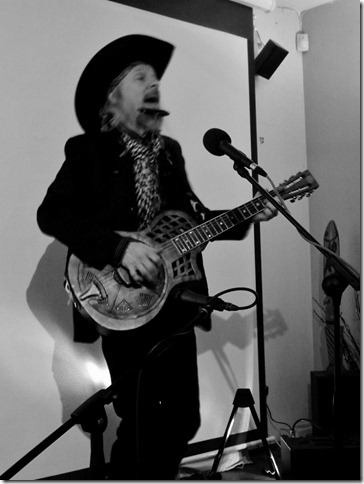 Phil Lee also proved to be quite the entertainer; full of little quips and anecdotes in between numbers, with the appreciative, Dingwall crowd hanging on to his every word. With lyrics also filled with, often un-PC, humour, I actually wondered if I was watching America’s answer to musical comedian, Bill Bailey. It was a wonder how he was *ahem* keeping it up, right up until he started mentioning his little blue pills!

One audience member was lucky enough to get the better of him, however. Having noted this person had been scribbling into a book for the majority of the evening, Phil asks, “What are you writing?” to which she replied, “Don’t worry, it’s not a review.” Phil appeared to look lost with confusion. Medicine Show promoter, Rob Ellen, later admitted, “First time I’ve heard him close to being stumped all tour!”

Phil Lee would also often shuffle along the stage whilst playing (as well as in between songs), and once showed off his ability to do three things at once, playing harmonica, guitar and dancing on the spot all at once, during ‘Les Debris, Ils Sont Blancs’, which loosely translates as ‘The Trash Is White’. The clincher, however, was the set of throwing knives he kept to the side during his performance. Occasionally, he’d pick one up and threaten to throw it into the crowd, but instead drop it to the ground. At one point, he asked for a volunteer, or “target girl”, but no one was brave enough to rise to the occasion.

For the remainder of his set, “The Mighty King of Love” went back to his acoustic, and was also joined on stage by the opening act, Steve, who provided an extra guitar accompaniment and even improvised guitar solos. Closing on the fantastic ‘Babylon’, I believed that Phil Lee went down a storm, leaving the Dingwall crowd feeling satisfied, after only the third ever Medicine Show gig held at The Greenhouse. Here’s hoping the success of tonight is a precursor of what’s to come for The Greenhouse, not just as a community shop, but as a live music venue.

Gig listings for The Greenhouse can be found on their Facebook page.