Dead Wolf Club play Mad Hatters, Inverness on the 4th of February. The gig is part of the tour to promote the release of the London based band’s debut album.We managed to get a chat with the singer of the band, John Othello. 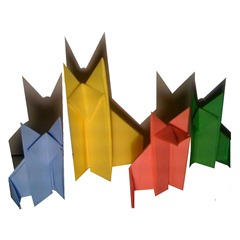 We noticed that this is your only gig in Scotland (apart from a festival appearance), what’s drawn you up here?

It’s always great to go to Scotland. We have all been on holidays there when we were kids on camping trip, hi-de hi. I’ve heard the audiences there are always very lively and cool though and were very much looking to playing in Inverness and Kilmarnock.

Apparently you met on on an airplane, a few thousand feet above Paris, that must be a story worth telling?

Sometimes the best Stories are kept secret like the Moon Landing. Yes we were all on holidays and ended up sitting next to one another by chance and just got talking about coconuts, knitting and Russia

Post Punk appears to be a frequent descriptor of your style, is it fair description, if not how would you describe it?

I would describe our sounds as Dark Punk! Drum beats on a table with a twist of Lemon

Can you tell us about your debut album?

The album encapsulates the two years I, Alwin and Martha have known each other and our joint love of pop melodies alongside loud guitars colliding against a punk ethos. The record works aggressively against a backdrop of frantic guitars, delay pedals and often delicate yet intricate drumming.

A lot of the anger on the record points to a dissatisfaction with the an ever disillusioned London, with News at Ten & Not What it Seems somewhat if not wholly influenced by loneliness, longing for goodness and the unfairness and economic struggle that encompasses the western world currently.

Despite our angst, we switch between dark and light at ease and don’t allow ourselves to pigeonholed with one sound. And maybe to our detriment, we will not pander their sound to anyone or any trend.

However we’ll let everyone else decide what they think of the album ,as music is just opinion as they say!We were just excited to be putting the record out there really and looking forward to touring!

Which of your own sounds best represents the band and why?

Probably when I sneeze as its very loud and edgy. Err sorry you mean Song? I would say News At 10 or Wave because of the Darkness and Light within the song and its lots of fun to play those songs!

Thanks to John Othello for his time