Another Brit Pop re-union !? Not only is it a Dodgy re-union but the 90’s Brit Pop rockers are releasing a New Album. 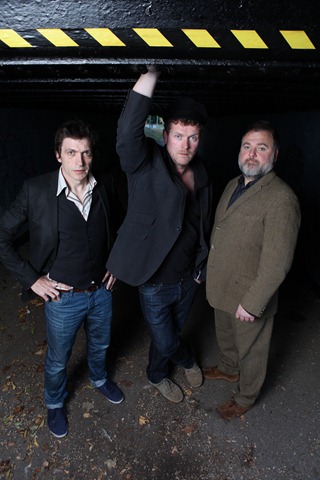 Dodgy rose to prominence during the Brit Pop era of the 1990’s. In the seven years they were first together they sold over a million records worldwide, released three albums and 12 Top 40 singles including ‘Staying Out For The Summer’, ‘So Let Me Go Far’, ‘If You’re Thinking Of Me’ and the Top 5 hit ‘Good Enough’, all still a staple of radio playlists. Amongst the highlights Dodgy were

Awarded an unprecedented 90-minute Saturday evening slot on the Pyramid stage at Glastonbury Festival in 1997 before headliners Radiohead. Not bad, for a band reputed not to be shy when it comes to enjoying a festival and for many the archetypal festival band.[Soft Break] [Soft Break]The band were reunited four years ago at the funeral for their lighting director Andy Moore, after which they embarked on a reunion tour.

Well received they set about writing and recording The New Album ‘Stand Upright In A Cool Place’ the original members Nigel Clark, Andy Miller and Mathew Priest recorded the album during the summer of 2011 in a farmhouse in Malvern and it was mixed in Texas.

Of the 11-year gap between albums, singer Nigel Clark says: “What’s the rush? We’ve taken our time to make sure this album is better than our last one! and that was brilliant. The fans deserve it and we believe that the songs are good enough to win us a whole new audience”

The Album will be available from 20th February 2012 and will launch the Band into the ‘Stand Upright In A Cool Place’ tour, bringing Dodgy back to the Highlands. Playing here last on their “Dingwalls to Dingwall” tour in 2000, the group visited the Hebridean island of Taransay, to entertain the Castaways being filmed for a BBC reality television series.

Dodgy play The Ironworks on the 11th of May, tickets on sale from the 3rd of February via www.ironworksvenue.com.