Absolutely fantastic to see new things being tried and venues stretching their comfort zones. So we were really pleased to hear of the Ruckus club night debuting at Studio 25 on the 3rd of February. The aim of Ruckus is “to bring fresh new underground music to clubbers in the Highlands as an alternative to commercial clubs and tunes”. 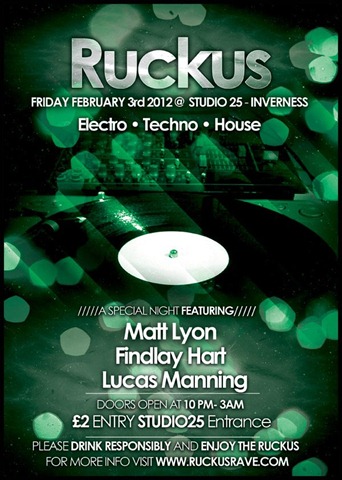 The new club night promises to be “all about the music, the people and the atmosphere.” brought together a trio of DJs, committed to bring a fresh club night to Inverness:

Matt Lyon, no stranger to the underground electronic music scene. From an early age he was blasting beats from his bedroom studio before branching out into all night raves and intimate venue gigs. Matt has travelled the UK and Europe in search of new and exciting Techno inspiration. Matt’s influences include John Digweed, Eric Prydz, Deadmau5 and Clouds

Lucas Manning grew up in the Bahamas in a prestigious recording studio so was instantly immersed in music culture. On arriving in Scotland he very quickly got into the electronic music scene. Inspired by the likes of Porter Robinson and Zedd, he endeavored to get involved in DJing.

Anyone up for a Ruckus?

You can keep track of forthcoming events at www.Ruckusrave.com