With an official announcement due on the 26th of January (see Rockness 2012 announcement date, announced), it appears that one act has already let slip/self announced their appearance via a popular listings site. 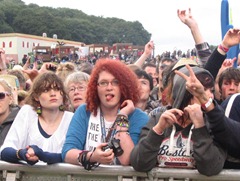 New Band of the Day No 1034 from the Guardian, To Kill a King will be returning to the festival to play Friday night.The Leeds five piece band have been named by a few as “one’s to watch” although Frank Finlayson described their 2011 appearance as “insipid” (full review – Rockness 2011- A Paid Perspective although to be honest the full review gives no more away). Resonance.co.uk state the band “places equal emphasis on both melody and lyrics without sounding mediocre”, and with the support of the Communion label, you can’t but think that Frank (or the band) were just having an off day.

Regardless they will be joining The Draymin (see – The Draymin announced as Sound City winners) on the line up of Rockness 2012. If you see any more early announcements we would love to hear them you can email us at admin@igi.gs.