Jim Kennedy concludes the Rhythmnreel monthly updates with a review of the year. 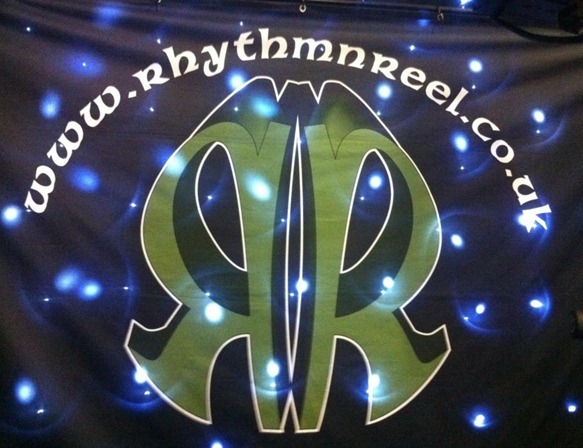 Well boys and girls, I’ve written this diary throughout 2011. It’s been a great year and been fun keeping you al up to date, through the 60 plus gigs of the year.

During 2011, the band had a couple of sold out trips to Germany that were great adventures. We also travelled to Switzerland for a St Andrew’s night celebration. Again, this was a fantastic trip.

At home, we played at Wickerman, Belladrum, Wizard and Loopallu festivals. We are hopeful that we’ll be doing the same and more next year. Hearing folk singing along with our songs is just spectacularly good fun.

We had the privilege of playing at a number of weddings throughout the year. We’ve even strayed to the central belt a few times and popped over to Lewis but we spent a lot of our time up and down the village halls (and marquees) of Wester Ross and Sutherland – Applecross, Achiltibuie, Kyleakin, Durness, Plockton, Scourie, Gairloch, Skerray and more were all “rhythmnreeled”. We’ve just had a ball all year long.

The band has had fantastic support from family and friends, old and new. There are folk from all over the North who have made special efforts to come see us play. However, special mention must go to the Scourie crew who came to see us every weekend in July and August – big thanks to you guys and to everyone who came to see us.

The year ended with a foray into the recording studio where we are about 2/3 of the way towards recording a new CD. We are hoping it’ll be out by Summer 2012. We hope for more exciting times ahead.

We are having (most of) January away from gigging, but we’ll soon be looking forwards to another set of foreign trips (we’re already confirmed for Germany, Holland and Switzerland); the festival circuit and all your village halls. Bring it on!

Thanks very much to Jim Kennedy, he will be back writing for the site in a different capacity very soon.