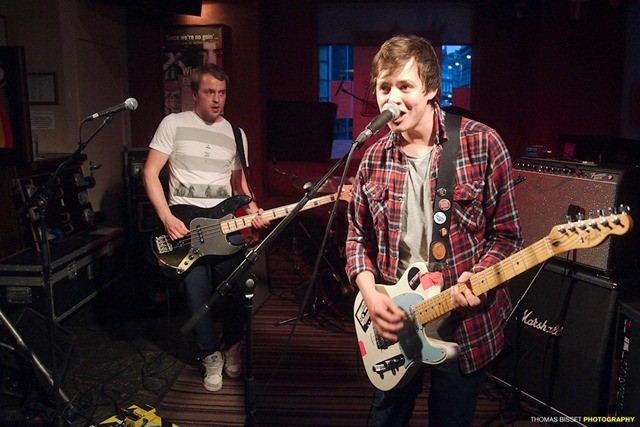 Drawing comparisons with Twin Atlantic and Biffy Clyro, He Slept on 57 are Inverness based trio Stuart Nelson, Kyle Campbell and Ewan Cruikshank. Absolutely no strangers of the local scene, they are releasing the single ‘Childsmile’ on the 21st of November with a launch gig at Mad Hatters on the 26th of November.

We managed to catch a few words with Stuart Nelson (Guitar and Vocals)….

Can you tell us about ’Childsmile’, and how are you feeling about the forthcoming single release?

We are looking forward to the single release and single launch. We put a lot of effort and time into this single and we decided to do the single launch in Inverness as that’s where we’re from and our hometown shows are normally pretty mental, hopefully this will be no exception! The single is released on the 21st of November. You can download it digitally (iTunes, Spotify etc..) you get Childsmile and a B-side as part of the single OR you can buy the physical single from our online store www.heslepton57.bigcartel.com you get Childsmile, a B-side and a Bonus track, there’s only 100 printed so thats pretty cool? We launch the single in Madhatters on the 26th of November.

We were trying to make sense of the video for the single; can you help us decipher it a little for us?

We wanted a light hearted music video where we could make fun of ourselves a little? The song is about getting older and becoming a different person so I thought having a video where we are doing things you do when your grown up but at the end of the day we’re all kids inside, hence the being dressed up like idiots playing rounder,s ha-ha. If that makes any sense? I was never very good at explaining things…it was good fun anyway! Our friend Joshua Porter shot it and we just got all our mates involved so was good fun.

You’ve had quite a busy summer, what were the highlights?

I’d be faster telling you the lowlights. Belladrum, main stage. That was crazy! Couldn’t believe the turn out it was amazing. We toured for two weeks with a band called The Lafontaines, that was incredible. The show in Stereo (Glasgow) was sold out, so much booze on the ryder I can’t remember leaving the venue! There’s a video of that tour on our youtube channel actually!

We can’t help but notice the plaudits for your live shows, what do you think your secret is?

Alcohol? No idea. As gay and cliché a as it sounds I sing from my heart and there is a lot of passion in our music so there are certain people that relate to the lyrics, maybe that?

There has been a relatively recent change in personnel, how do you think this has affected the dynamic and sound of the band?

We had our friend Ewan play bass for the last year or so, he left as he was moving to Glasgow and it wouldn’t really work out. My brother (Kevin Nelson) is now playing bass which couldn’t be more perfect. The timing was great as he has been in Uni, then he lived in Canada for a year but now he is home for good. So when Ewan left we were keen to get him slappin the bass!! Since having Kevin has joined the band we have been writing a lot more and the band feels a lot tighter. We’re a wee family! Hopefully we will have another EP/Album early next year!

All the info you need is @ www.heslepton57.co.uk

He Slept on 57 will be playing Mad Hatters on the 26th of November (supported by Skinny Machines. They will also be seen at the Winter Showcase on the 28th of December at the Ironworks.